Or, now matter how long you’ve had your motorhome (7 years) you can always learn something new about it.

We decided to take it easy today.  We’ve been working quite a bit here at J.Strom Thurmond COE project and enjoying every minute of it.  But as the saying goes:  “All work and no play…” well, you know how it goes.

Recently we upgraded our portable heater we use inside the Journey to a new one.  Nothing wrong with the Pelonis unit, but after more than 8 years of use (we even used it in our stix-n-brix)  I decided to order a new unit.  Andy, from MyOldRV.com, a no nonsense fellow gate guard down in the Texas oil patch highly recommended a Broan unit as rugged, well made and long lasting.  I decided to buy one and keep the old Pelonis as a standby. 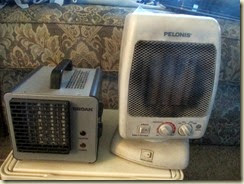 The Broan heater, on the left is smaller, and an all metal case.  It puts out some good heat and is less likely to tip over.  Andy was right, it’s a good unit.

Today as we loafed around, we had the new heater running to keep the chill off, just like we always have done.  Being lunch time, I threw some bread in the toaster and Marti put some soup in the microwave to heat up.

Then all the 110 volt stuff stopped working, the heater, the toaster and the microwave.  As well as the TV.  Hmm, I guessed the new heater pulled a littler higher amperage than the old one and must have tripped the main 50 amp breaker on the campground pedestal.  I checked it and it didn’t seem to be tripped but I turned the breaker off and then on again. 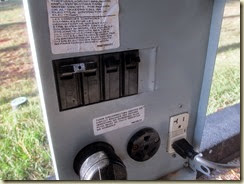 No good.  I double checked the Progressive Industries surge protector I have, but the lights all indicated power was flowing normally into the Journey. 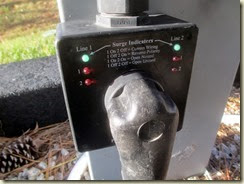 Okay, maybe it’s one of the GFI outlets I have in the Journey.  I checked them and they were fine.  The mystery continued. 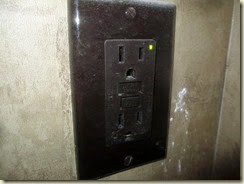 So, it must be a breaker tripped in the 110volt panel.  I opened the panel up, and didn’t find any tripped, but I clicked them all on and off anyway. 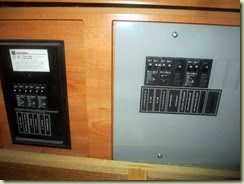 Now I’m confused a bit.  So I started the generator up to see if I’d have 110v power.  Nope.  Now the head really scratching begins.  I still had 12volt lights, but I double checked their breakers, too, just to eliminate some possible strange issue from there. 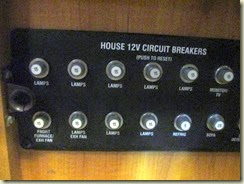 I went to my electrical management panel and found the air conditioner and fan still worked.  They are 110v units, so that really had me puzzled.  Some 110v power was getting in to some of the equipment but not all of it.

What to do?  Well, a really good place to start is RTM (Read The Manual).  I dug it out and spent a few minutes reviewing the electrical system.  Unfortunately, it didn’t reveal any other ideas, I had covered everything correctly.

Now I’m really scratching my head. All the while Marti is looking at me expectantly knowing I’ll pull some magical solution out of my hat.  Except I’m not wearing a hat.

I shut off the generator and double checked to see if the a/c would work on shore power and it did.  This is really strange.  I started to wonder if I had some sort of issue with the main power on/off switch located in the back of the Journey.  Jeri and Terry just posted on their blog that they had that kind of a failure in their motorhome.

I thought about it and ruled it out, because if it was bad, I’d have no 110v power into the Journey and I had some.

What else to do?  If all else fails, PAWW (poke around and wiggle wires).  I went back outside and opened my electrical bay.  Looking around, I noticed this tiny little button on my inverter. 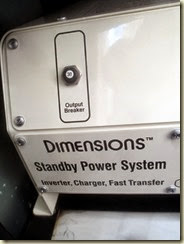 It had a number 30 on it, indicating a 30 amp breaker.  I pushed on it and click, it reset.  It had popped when too much voltage was going through the electrical system with all the devices and the new heater on.  I went inside and everything worked.

Phew!  Problem solved and a new thing learned about our motorhome.

What threw me was the a/c unit has a separate wiring circuit that does not go through the inverter.

Just proves you can teach an old dog new tricks.  Now I hope I can remember about that breaker if it ever happens again.

Posted by Paul and Marti Dahl at 5:18 PM