Making The Most Of Every Opportunity

Springtime at the J. Strom Thurmond Corps of Engineers Project means scrambling to get everything ready for another summer season in this beautiful area.  Campgrounds and day use areas are being groomed and polished to be in tip top shape for all the campers and day trippers to enjoy.

Springtime also means we're spooling up to present our Water Safety Program to the area school children, every year we reach about 6000 kids of the elementary and middle school age to make them aware of the need to stay safe in the waters of Thurmond Lake.

To reach even more kids of all ages, Marti and I participated in a huge outdoor sports show to spread the word.  We covered a booth and had all kinds of handouts promoting Corps of Engineers programs and information on our country's great national park system. 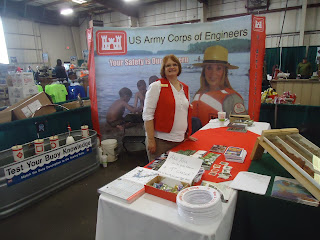 Right nearby our booth was a TV celebrity doing a meet and greet of folks attending the show.  I couldn't pass up the opportunity to have him help plug our water safety program. 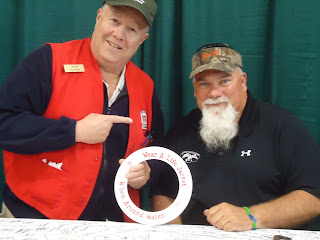 John Godwin from Duck Dynasty, a really nice guy, very gracious to all who stopped by.
Maybe I'd look good in a beard like his...
Thanks for visiting and feel free to leave a comment.

It's Not All Work

But as the summer season is rapidly approaching, it sometimes seems like it is.

With the heavy winter rains and the flooding that occurred all around J. Strom Thurmond Lake, the rangers and volunteers have been working hard to get all the campgrounds and day use areas ready for use.  The rains caused lots of damage. 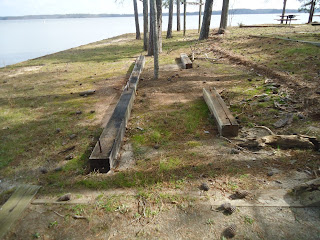 This is just a picture of a berm that was broken apart by the water, you can see in the right of the picture the line of pine needles that marked the high water mark.  We've found things like this all around the lake, it'll take a lot of man hours to fix.

To add insult to injury, we had a heavy windstorm with more rains, causing trees to fall all over the area.  We spent a couple of days checking COE property to asses the fallen trees. 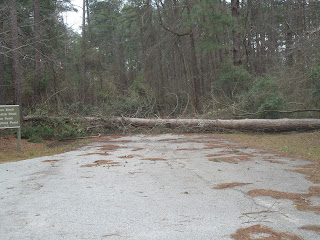 Just one of the many downed trees we found.  Thankfully it missed damaging the sign.  We don't need any extra work!
Another major job was checking all of the hundreds of grills in the parks around the lake.  Water and rust has taken a toll on many of them.
Some can be repaired with a new plate on the bottom. 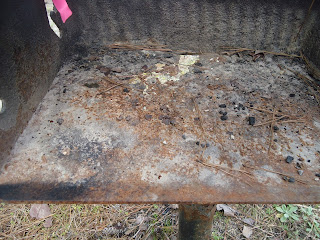 Others, not so easy.  A total replacement is needed on this one. 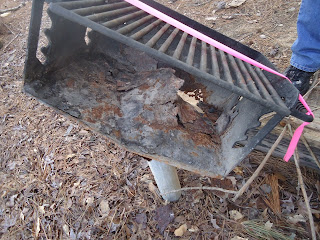 We do love our workamping jobs, but when a day comes with lots of warm sunshine, we try to hop on our motorcycle and ride the beautiful roads around the area. 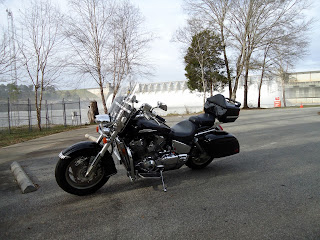 Safety is our number one concern when we're out riding.  We upgraded to full face helmets for better protection, but it made it impossible to talk while riding.  I found some nice helmet radio communicators that I installed on the helmets, now we can talk as easily as if sitting in the Journey.  On Marti's helmet, on the left side, you can see the little black radio unit attached.  Inside the helmet are two speakers with installed microphones.  They work amazingly well and Marti gives them a big thumbs up. 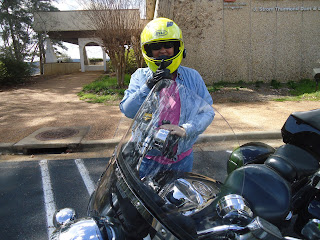 Another busy week ahead.  We're looking forward to the challenge almost as much as heading out for another motorcycle ride.   ;c)
Thanks for visiting and feel free to leave a comment.

The Battle Lines Are Drawn

Living in our Journey is very nice, with all the comforts we could possibly want (except a dishwasher, I have to stand in for that).  Sometimes, though, little things annoy us, like bugs.

We've carried on fights to get rid of stink bugs, palmetto bugs and most recently lady bugs that have wanted to share the good life with us.  It took a while, but we overcame them and ended up victorious.

The other night I was up reading in the wee hours, a book on my Kindle I just couldn't put down.  Out of the corner of my eye, I saw some movement.  Another palmetto bug?  Nope, it appeared too big and moved too fast to be that.  What was it, my imagination?

We got a positive answer the next morning when Marti found bunches of torn toilet paper in a pile in one of the three drawers under the bathroom sink.  Evidently whatever had built that pile had pilfered the paper from extra rolls kept in the bottom drawer.

Yep, using my investigator talents, I came to the conclusion we've been invaded by mice!  Telling Marti the results of my poking around resulted in her practically jumping into my arms and clinging to my neck like a second skin.  For some reason, she's terrified of the little buggers.

We went off to the store and armed ourselves to the teeth with anti mouse products.

Placing the devices strategically around the Journey resulted this morning in:  Mice - 0, Me - 2.
Looking around I found they sneaked in through the wet bay, climbing in through the hole around the sewer hose.  I rectified that highway with some steel wool.
After cleaning out the nest in the bathroom drawer before heading out this morning, coming home this afternoon revealed the start of another nest.  The war isn't over yet, but I'm sure we'll get them all.  With fresh traps out and the entrance sealed, the mice's time is limited.
And Marti won't have to sleep with one eye open.   ;c)
Thanks for visiting and feel free to leave a comment.