Several days ago my list of blogs I follow has disappeared from my blog page.  Looking into it I haven't found a solution, has anyone else had this issue?  Blogger has presented glitches in the past and things returned to normal after a short while. Trying to manually relist my blogs hasn't worked, either.   Hopefully this gets fixed soon.

It has been a long haul these last five months dealing with my colostomy bag waiting for my reconnection surgery.  To say I won't miss the bag is an understatement, I know it had its purpose and there was no alternative, but it doesn't mean I was ever really fond of it.  When I was fitted for the bag after my initial surgery last April, the ostomy nurse said to expect an accident with it from time to time.  She didn't lie.  And I won't go into the accidents I had, use your imagination...

I had to have a colonoscopy the day before the actual surgery. The doctors want to take a "look" to ensure there were no surprises waiting when they opened me up.   Taking all the prep stuff is always not fun, having to deal with the bag made it even more "fun".  Insert the word "accidents" here.  Yep, use your imagination.

After the colonoscopy I wasn't allowed anything to eat and no drinking of any liquids after midnight leaving me feeling like a member of the Sahara Desert dying of thirst club.  If anything, it made me even more eager to get into the operating room the next day for my re-plumbing job.  No fear or apprehension, just a deep desire to get a ice cold glass of water.  Of course, I was second on the surgery list that day with the surgery scheduled to start at noon.  My "luck" didn't fail me again and the first surgery went way longer than expected.  Insert sound of me sucking my tongue unsuccessfully for any inkling of moisture here.

Finally I went in to surgery, Marti, her sister Gail and my daughter Heather sat in the waiting room while the operation was underway.  The surgeons encountered some issues and the whole thing took over 5 1/2 hours to be completed, with the removal of another 10 inch section of bowel that had more diverticulitis in it before the installation of a titanium coupler joining all my plumbing back together.

Coming out of the anesthesia in my room, the doctor told us the surgery went well and I needed to get right up and walk all around the hospital floors 4 to 5 times a day.  That was quite the challenge, but as a reward I could have a teaspoon of ice chips every hour.  I wasn't going to let the massive pain in my belly stop me.  No way...until I tried to get out of bed and take that first step.

Thankfully Marti was there to coach me through my steps and I was able to stagger a lap around the hospital and then collapse back in bed.  The reward of ice chips was heavenly.

The first night after the operation I was able to walk the floor three times with Marti holding me up on one side and the IV pole machine wheeling along on my other.  I looked just like Tim Conway doing his old man character shuffle from the Carol Burnett show.  I got lots of kudos and congratulatory smiles from the nursing staff on the floor which made me feel good.

The next day, the doctor put me on a clear liquids diet in addition to my ice chips.  I was living large now, with some kind of mysterious, unidentifiable broth each meal and another colorful cup of Jello. This is where I made an amazing discovery.  Hospital Jello, no matter what shade or color, all taste the same.  Makes me wonder if they pay extra for that.

Now that I was getting a better diet and making more and more laps round the floor, the next challenge was the ultimate one.  Putting the newly reconnected plumbing to use.  No way was the doctor going to let me go home until the "spirit" moved.  The number one priority was number two.

After several more days of disappointment, the doctor order some laxatives to hopefully improve the situation.  With a heavy dose of a foul, chalky liquid, I choked it down and we waited some more.  And walked some more.  And ate even more shades of Jello.

Then...Sweet Mother of Magnesia!  Words like Tidal Wave, Whirlpool and Tsunami come to mind, but it wasn't that spectacular, just enough to know that things were starting to work as expected and even better I could go home the next day.

I'm now home back at the Journey, recuperating.  It's going to be a long period of healing to get back to normal, no driving, no lifting more than 10 pounds, no bending, stretching, bungee jumping, marathons or any other things that make up my normal routine.  My beloved motorcycle is under its cover resting for now, too.

It was pretty extensive surgery all tolled and I'm fortunate to have come out of it with an excellent prognosis for the future.  I'm grateful for the two surgeons that did my life saving operation and my restoration procedure.  They are special people who go to work every day where the sun don't shine.  Think of them the next time your job frustrates you.

Most of all, I'm grateful for all the prayers, thoughts and encouragement from all my friends and family, but none more so than Marti, who stuck by my side and helped me when I needed the help, pushed me when it was too painful to walk and kept me going.  How was she able to do it?

She threatened me with another shade of Jello!

Nothing too exciting going on at the COE, summer wrapped up with the Labor Day Weekend.  Despite lots of heat, people made the most of the last summer weekend and we spent three days covering a gate house at one of the day use areas.

With the approaching fall, it's now time to start shutting down the parks and getting things put up for the winter.  I was out the other day without Marti, who was helping her sister Gail move in to her new house down the street from our still building house.  I was collecting life jackets from the loaner board at the beaches around the lake.  Since most of the COE beaches are now closed, the life jackets are removed, cleaned, inspected, sorted and stored to be ready for use next season.

All was going good until: 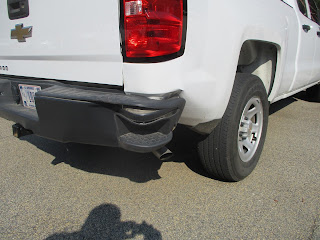 I backed into a tree at one of the parking areas.  Barely tapping the tree at a speed of slower than a walking pace, the bumper buckled right in to the quarter panel, bending it too.  Of course, to make matters worse, it was the boss' truck I was using.  I certainly have left my mark on the COE!  :c(

We checked on the house build today, it's coming along, the kitchen cabinets have been installed.  Marti is wondering how they are every going to clean up the mess. 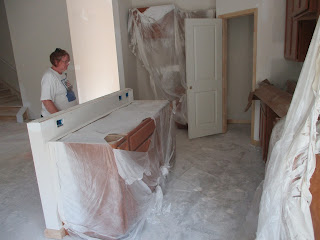 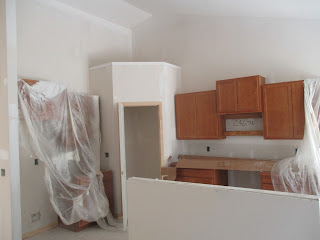 Tuesday is my surgery date for my plumbing reconnection.  I'll be so glad to get this "behind" me.  Anticipating a 3-5 day hospital stay if all goes well and a couple months recovery to get back to normal.  I'll have to hibernate my motorcycle for a while,too.

Just wanted to give an update so you don't think I fell off the face of the earth or have been abducted by aliens...