How It All Ended

The hint picture in the last post was of a mobile RV service truck. 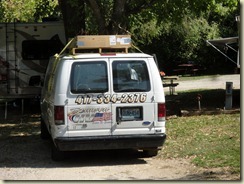 He was at my neighbor’s across the street working on his RV.  I saw my neighbor with his check book writing out payment.

Luckily for me, I did not have to use him.

At the RV dealer in the last post, the guy that was helping me thought he might have a capacitor of the size I needed.  I was skeptical, the inside of the place looked like the TV show Hoarders, junk everywhere.  He went to a shelf, pulled a couple of boxes off,  found the one he was looking for, peered inside then put the box back.  Then he walked to another shelf, pulled out a box, rummaged around inside and pulled out a capacitor.  “That’ll be $14.95” he said as he handed it to me.

I looked at it, it was a different brand than mine, but looking at the specifications printed on its side, it was the correct one.  I pulled out a twenty and handed it to him.  He didn’t have any change so I told him to keep the change.  I was just thrilled to get the part.

Here is the new (left) and old capacitor (right) side by side.  You can see on the old one the damage on the top where water got in, corroded the terminals and eventually caused so much heat from a bad connection that is melted and failed. 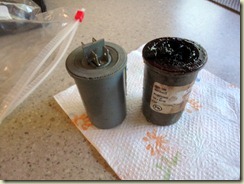 I cut off the damaged wires, put on new terminals and put the capacitor back in place. 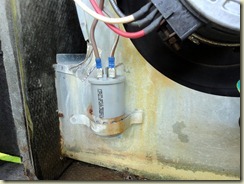 I bought some liquid electrical sealant at the nearby Lowe’s and sealed the top.  Also I moved the capacitor as far up in the bracket as I could.  Why?  Read on. 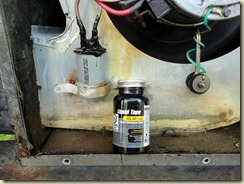 I fired up the fan and it worked perfectly, thank goodness that I didn’t have to give any of my money to that mobile RV service guy.

Now, why did the capacitor fail?  If you look closely at the above picture, to the bottom of the fan housing (the big silver thing) you see a waterline stain about the last two inches at the bottom.   Also, to the right of the capacitor, you’ll see similar staining running down the fan housing.

Okay, another little lesson on how things work.  Air conditioners not only cool the air but they remove the moisture or humidity from the area being cooled.  That is why you see drips of water under your car about where the passenger’s feet are when you run the air conditioner in your car, or on your motorhome, if the a/c is roof mounted you get water dripping off the roof.  On basement a/c units like mine, the water drips out of the bottom of the unit.

Winnebago knows that moisture can be flung by the fan so they put a rubber cap on it to protect the terminals.  So why did mine a/c have so much water in it.  I’d see water dripping underneath the a/c unit when it was on.

The failure was caused by this little device. 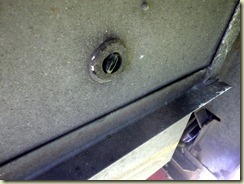 That round thing is called a duckbill.  It is a little rubber hose with a soft end that stays closed.  When enough water is in the unit to push the duckbill open, the water drains out.  When the water is all drained out, the duckbill closes.  It closes to keep bugs and wasps from building a nest in the hose, blocking the drain.

Sometimes the rubber sides of the duckbill get stuck together and don’t open.  Mine were stuck together.  The water I saw dripping from my a/c was water leaking out of the seams of the a/c housing, but not at a very fast rate.  Because I saw water dripping, I didn’t think anything was wrong.  But water built up inside my unit as seen by the staining and was flung around by the fan, soaking the capacitor and actually submerging it at times because it was located low in the bracket.

So a new maintenance item has been placed on my list.  Check the duckbill.  How to check it?  This is very simple, stick a screwdriver in it to make sure it is open periodically. 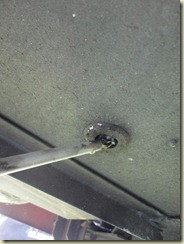 Even with the side of my a/c unit off, when I stuck the screwdriver up the duckbill, water came pouring out.  It drained for several minutes, I ‘d guess at least a quart came out.

This is something that Winnebago owners (yes this means you, Sherry) should check, and other brands like Alfa that use the same type of basement a/c unit should check.  If you’re a/c unit is on the roof, you don’t have anything to worry about.

So a simple thing caused me this fun.  Reminds me of a guy I worked for years ago.  He would not fly on an airplane, always traveled by train.  His rationale?  He said it was always the ten cent spring that made the airplane crash.

Now with everything fixed, I can get back to enjoying the shows in Branson.  :c)

Posted by Paul and Marti Dahl at 6:44 PM