And Now For The Rest Of The Story

There is a little more to yesterday’s story of the ham and cheese sandwiches, but first, a little bit about our day out on the Fourth Of July.

We’re having a great time being close to Corey, Amanda and of course, Anabelle. 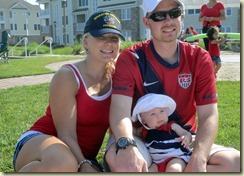 We took a walk along the beach in Long Branch, New Jersey, where they were holding a festival, little vendor booths that were selling all kinds of jewelry, trinkets, food and drinks.  Sort of like the big January Quartzsite RV show, except there was nothing for RVs, there was no big tent and most of the people were several decades younger than your average Quartzsite attendee. 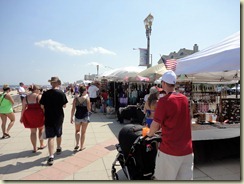 The beach looked tempting, but the crowds were pretty heavy and the $7 per person fee to dip your toes in the ocean put that idea out of our minds. 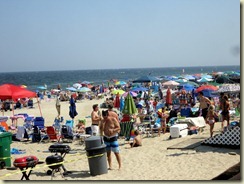 The temperature was in the mid 90s, pretty hot but fortunately the wind was blowing, keeping things a little more bearable. 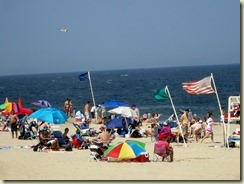 There was a sand castle competition going on.  I don’t know how they kept everything in place with the wind. 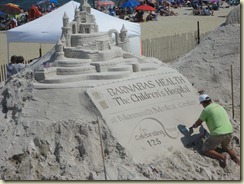 Anabelle enjoyed seeing the sights, she loves being outside and hanging with her mom. 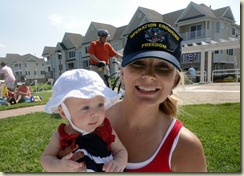 She watched all the people and enjoyed all the activity. 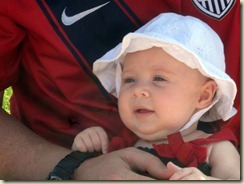 But eventually, all the smells of the cooking vendors got to her and she needed a little pick-me-up. 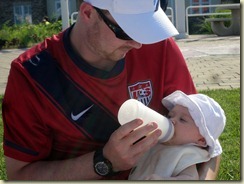 It was a great day and Anabelle’s first Independence Day.

And now for the rest of the story:

We were ham and cheesed out.  Yet, even after the big Liberty celebration was over, we still had a lot of work to do, which meant many more hours underway on our Coast Guard boats.

The base galley prepared more box lunches for one last day, July 5th, then things were to return to normal and we’d have to provide our own food.

The truck dropped off a bunch of coolers at the station.  We looked at all the coolers stacked next to the docks and every boat crew passed on picking one up.  Instead, we all had either brought food from home, or picked up snacks from the base commissary.

At the end of the week, with things cleaned up and more or less back to normal, we watched the boat crews from other stations depart for their home bases.

There was one item that still had to be taken care of.  The galley’s coolers with all the untouched box lunches needed to be cleaned out and returned after sitting untouched for days.  We opened up the coolers to dump out the much despised ham and cheese sandwiches .

The galley, probably after hearing of our complaints on providing all the same sandwiches, had switched their supplied meals.  For the last day, they changed the menu and supplied fried chicken, mashed potatoes and gravy and corn on the cob!

Too bad they didn’t tell us and it all went to waste.  Well, not totally, because we dumped all the now smelly, spoiled food into the water.  I’m sure the fish and crabs enjoyed the free eats.

And that is the rest of the story!