We had been working up to this historical event for over two years.  Watching the progress of the restoration work that had been going on since 1984, we knew it was getting closer and closer as the new torch flame was installed. 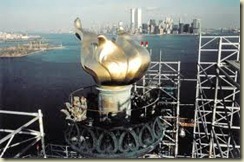 Then the scaffolding that had hidden her from view for those same two years came down. 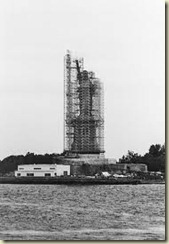 The Statue Of Liberty had been repaired, restored and returned to all her glory.  And to celebrate the finished product, the largest celebration ever held in New York Harbor was going to take place, tall sailing ships from all over the world along with two nights of the largest fireworks displays were on the agenda.  Liberty Weekend, 1986.  The Coast Guard was to control the harbor, to provide safety and security to all who were sailing on the harbor waters. 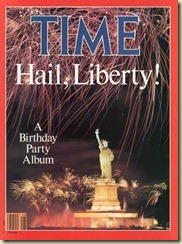 Along with thousands of spectators along the harbor shores and skyscrapers in Manhattan, were over 40,000 small boats, loaded with people to watch the spectacle from the harbor waters. 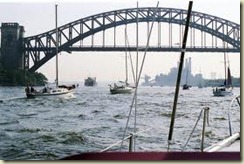 I was assigned at the time to the U.S. Coast Guard Station New York, at the Coast Guard base on Governors Island in New York Harbor.  We were charged with riding herd on all the small boat spectators, keeping them safe and secure in their assigned anchorage areas and not wandering around the lanes reserved for the tall sailing ships, the fireworks barges and Navy ships. 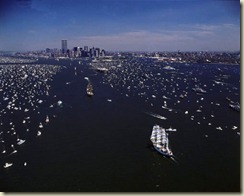 The week before the celebration, spectator boats and Navy ships began arriving, necessitating long days underway patrolling the harbor in Coast Guard 41 ft. utility boats, often 14, 16 or more hours underway, ensuring safety, organization of anchorages and help to boaters that had problems.  We had dozens of Coast Guard small boats and crews from all over the East Coast assigned to help us. 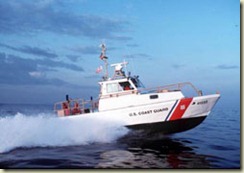 To help us with the days underway, the base galley prepared boxed meals for us.  Every day before we’d get underway from our base on Governors Island, we’d pick up water bottles and the box meals and get underway.  Every box meal was the same, an apple, a bag of chips and a ham and cheese sandwich.  Eating the same sandwiches every meal while on patrol began to get old.  Not just old, but tiring.  Not just tiring, but downright disgusting.  Only being starved from the long hours and the hot, hard operations could we choke them down. 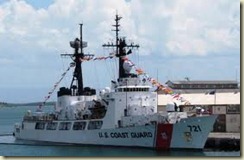 Abe told me the Gallatin was going to be anchored in the harbor as a communications platform and if there was anything we needed all we had to do was come alongside and ask.

The week dragged on, the spectator boats for the most part were good, but there was constant issues with a few that kept us hopping, all the while choking down those ham and cheese sandwiches.

Then the night of July 3rd came and President Reagan pressed a button that lit Liberty’s torch, starting an incredible display of fireworks.  Even though the display was amazing, the next day, July 4th was to be the most memorable day ever.

I was underway with my crew about noon on the fourth, with our cooler of water and boxed meals.  All day long we patrolled the harbor lanes, keeping spectator boats away from the tall sailing ships sailing into the harbor.  I ran the emergency SAR (Search and Rescue) boat, we were tasked with nothing by medical or life and death emergencies.

All day and into the darkening night we went from area to area helping people in need. In severe cases we took the injured or sick person off to special landings at various places in the harbor to get medical aid or evacuation via ambulance.

Then darkness fell and the fireworks show started.  Lower Manhattan was ringed with eleven huge barges loaded with amazing fireworks. 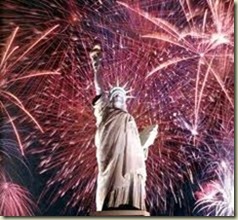 The show was breath taking, at least what we were able to see.  I had to conn my 41 at one point between two of the barges to Battery Park to evacuate a desperately sick person to another aid station, to be taken to a hospital in an ambulance.  Lower Manhattan was jammed shut and no vehicles could move anywhere because of the thousands  of people.  I’ll never forget the ashes of the fireworks raining down like black snow all over my white boat. 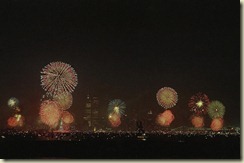 My crew and I were busy all night, responding to many medical cases, too many brought on by excessive drinking.  I was drenched with sweat from maneuvering my 41 all around hundreds of anchored boats in the dark, while worrying about catching someone’s anchor line in my propellers.  Fortunately, I never snagged one.

Morning came and we watched the sun rise over Lady Liberty.  The spectator boats began to leave the harbor en mass, causing all kinds of confusion and problems.  We did the best we could to herd them out of the harbor in somewhat of an orderly fashion.

We paused a while to eat some breakfast.  Tuttle, one of my crewmen opened the cooler and pulled out some box meals.  Opening them up, once again we found the ham and cheeses sandwiches.  As hungry as we were, none of us could even think of eating another one.

Then it hit me!  Remembering what my friend Abe on the Gallatin said, I turned the 41around and headed over to the cutter.

Several minutes later I pulled alongside the Gallatin and we yelled up to some of the crew on the deck and asked if they could provide us with some breakfast food as we had been underway all night.  One crewmember said no problem, he’d get us some chow.

My crew congratulated me on my genius, we all had mouth watering visions of maybe some eggs and bacon, or bagels or even pancakes and french toast.  Several minutes later the crewman emerged from a door on the Gallatin with a big bag which he handed down to us.

I thanked him very much and headed the 41 away from the Gallatin and back on patrol.  My crew opened the bag and pulled out four tin foil wrapped items.  We opened them up and found…

To this day, I rarely eat ham and cheese, and each time I do, I remember the Liberty Weekend 1986, and the Independence Day celebration I’ll never forget.