Sandy Hook is a seven mile long peninsula running South to North and points right into New York Harbor.  It is the northernmost New Jersey oceanfront beach.  It is part of the Gateway National Recreation Area and it is a great place to visit, with beautiful, white sandy beaches, miles of hiking and biking trails and all kinds of fishing and wildlife viewing areas.  During the summer, thousands of people flock to Sandy Hook to enjoy its wonderful recreational delights.  The famous landmark of the area is the Sandy Hook Lighthouse, built in 1764 and still operating to this day. 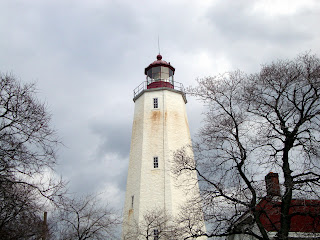 Years ago, Sandy Hook was an U.S. Army base, Fort Hancock.  Multiple gun emplacements  were constructed all along the peninsula to protect New York City from an ocean borne attack.  Fort Hancock also was an artillery testing range.  New types of cannons and munitions were developed and tested here.  Eventually the artillery became so powerful that they could fire shells farther than Sandy Hook's seven mile length, so the testing was discontinued.  However, Fort Hancock's guns guarded New York during both World Wars and in more recent times saw missile emplacements taking over that mission.
In 1974, Fort Hancock was decommissioned as it was obsolete and it was turned over to the National Park Service.  The gun emplacements are still all over  Sandy Hook, slowly crumbling to the ravages of time and weather. 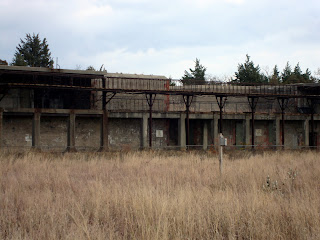 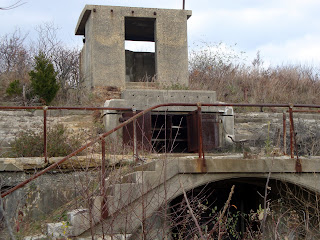 At the very tip of the "Hook" as it is known to the locals, is a Coast Guard base, fenced off from the tourists, a private haven.  We were blessed to live there for 11 wonderful years.  Our three kids grew up here and had many other friends as about 300 Coast Guard members and their families lived here year round.  Can you imagine having your own beach and sand dunes to run free in?  And all your friends living right next door?  It truly had the feel of a small town and everyone had something in common:  Operating and maintaining Search and Rescue vessels that protected the oceanfront entrance to New York. 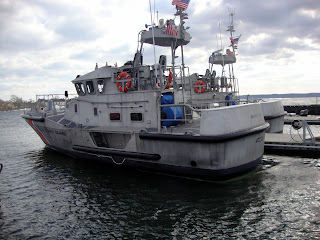 A 47 foot Motor Lifeboat
Coast Guard Station Sandy Hook has two motor lifeboats home-ported there, along with two small boats and two cutters, a 110 ft cutter and an 87 ft cutter, ready to respond to any emergency and often found patrolling to keep the ocean safe.
We toured one of the 47' MLBs, they have twin Detroit Diesel engines, something that I'm familiar with. 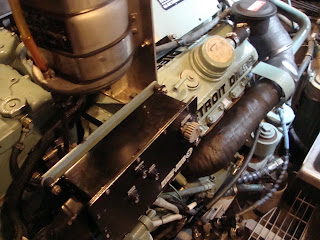 The pilot house looked like the cockpit of an airliner, certainly much more advanced than the rescue boats I ran in the past. 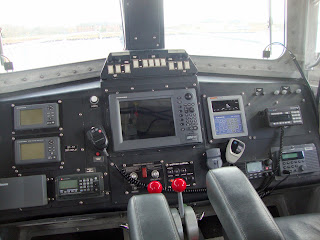 We walked up to an area that has an overlook of New York.  You can see New York City off in the distance.  It was sad to see it without the twin towers of the World Trade Center. 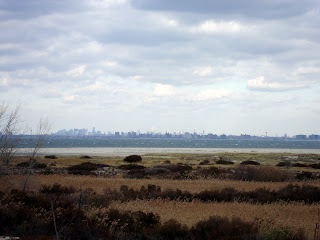 We took a picture of our son, Corey and our DIL Amanda who were with us. 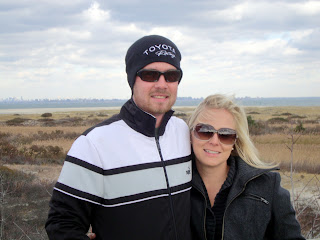 Corey took our picture.  Yes it was cold and very windy! 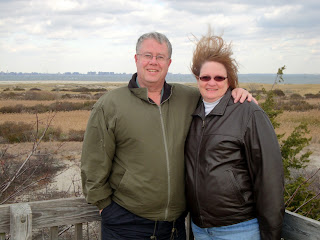 We visited the three homes we lived in there.  We started off in a small, three bedroom townhouse, 2A. 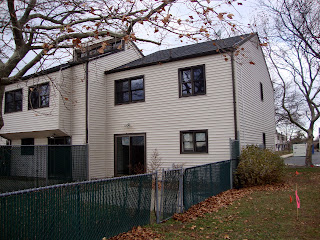 As the kids grew and I advanced in rank, we qualified for larger quarters, here is 6A, a four bedroom townhouse. 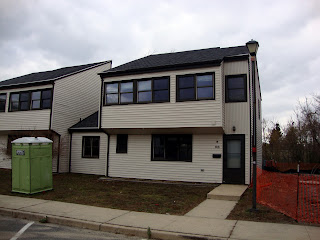 We spent our final years at the Hook living in a new house, complete with a two car garage. 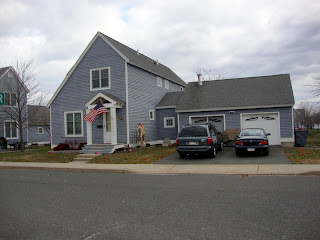 As we walked around, in our mind's eye, we saw our friends, and great memories came flooding back.  At one point, Marti and I looked at each other, we both got a little teary-eyed and realized what an incredible blessing we had living here.
No visit to the Hook is complete without paying respect to the lighthouse.  It is still maintained by the Coast Guard.  We had climbed its 95 iron steps many times when we lived here, we often took visiting friends and relatives up to the top.  I even re-enlisted on top of the tower back in 1990. 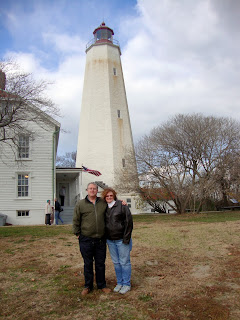 Twelve years ago, we moved off the Hook, kicking and screaming as I transferred to a new job.  We may have left Sandy Hook, but it never left us.  Around our present home today, there are paintings, photographs and nic-nacs of the Sandy Hook light.  It will always be "Home" to us, even if it's just in our hearts.
Thanks for visiting and feel free to leave a comment.

Posted by Paul and Marti Dahl at 7:47 PM