Oh Boy.  A hot topic.  Good for many a rousing debate with your RV friends around the campfire.  Almost as passionate as debating politics, religion and overnight parking at Walmart.

On many of the RV forums, discussions about carrying a gun for protection in an RV gets so many replies from both sides, pro and con, that the threads usually descend into name calling and threats, resulting in the locking or deletion of said thread by the forum moderator.  Hmm. 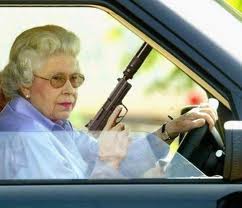 I am a firm supporter of the Second Amendment where a citizen is guaranteed the right to own a gun.  That being said, I'd like to put a different perspective on carrying a gun.

I don't personally own a weapon.  I live with a weapon 24/7 due to the requirement for me to carry it for my job.  It is a pain to live with it.  It adds a whole different dimension to life.  Requirements for a trigger lock, a safe, separation of ammunition from the weapon.  What clothes to wear to conceal it, I'm not permitted to carry it openly except in very special, limited circumstances.  For example, here I am in Iraq, where I carried both a pistol and a rifle. 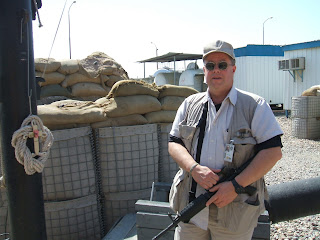 Summer wear, winter wear, accessibility.  Do these pants make my (gun) butt look big?  I've worn holes in many a suit jacket, blazer and pants from the constant rubbing of the gun against the fabric.

All these issues may be moot if you just keep the gun in your RV.  Is it accessible if you really needed it?  Is it locked up, is the ammunition handy, is the gun loaded?  There is a lot of forethought needed to have your gun ready to use. 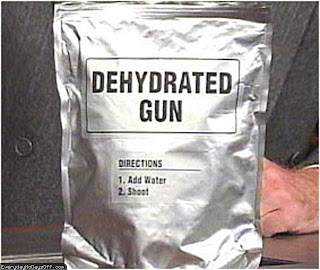 I shoot my gun at least quarterly, several hundred rounds at a time.  When I attend training, there is always variety in the shooting.  Standing close to the target, standing farther away.  Kneeling, behind cover, low (night) light conditions.  Shooting while you move, shooting with your other hand, reloading, clearing a jam.  Shooting wearing a coat, a sweat shirt, from a different holster.  Seated in a car, a house, behind a mailbox or a telephone pole.  Again and again until it becomes a habit, muscle memory where you react without even thinking what you're doing. 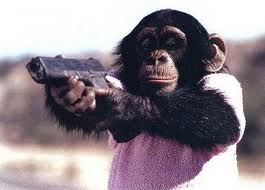 Further training is given on scenarios where you have a non firing gun and you watch situations on a video screen to see if you are in a shooting or non shooting situation.  You need to be sure, really sure when to pull that trigger and when not to. 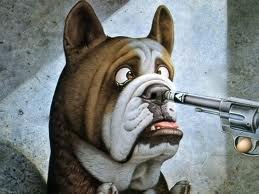 Once, in all my years of service did I have to pull my weapon.  A late night stop at a gas station in Washington, DC where a fight broke out between two people at the other side of the gas pumps.  One person was getting ready to stab the other.  A fraction of a second later my gun was out from underneath my suit jacket and pointed ready to fire, I actually surprised myself at how quickly I was ready.  Fortunately, the stabbing was stopped and the person was arrested.  Could I have done that with out all the practise and training I had over the years?  I don't think so.

Without getting into legal issues that vary from state to state, permits to own a gun and to carry it concealed, I want to point out that carrying a gun is just more than point and shoot, but carries with it a responsibility to know when to shoot and when not to shoot.  Are you ready to deal with the consequences of where that bullet goes after you pull the trigger?

Statistically, the average gunfight between two people takes place with a distance o f six feet, lasts 2.5 seconds and nine rounds are fired before one of the two people is hit.  Amazing.  And a more sobering fact: Many police officers are killed by their own guns.  The gun was pulled away from them and then used on them.  These are highly trained police officers.  What would you do if someone tried to pull your gun away from you?

Carrying a gun in an RV requires lots of thought, preparation and practice.  Will I carry a personal weapon in our Journey when we hit the road full time?  I have not decided.  I am, however a big fan of Pepper Spray. 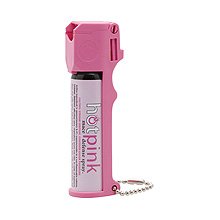 A single burst to the face can disable even a large person, who will end up rolling on the ground, crying like a baby and blowing giant snot bubbles out of their nose.  At least that is what I looked like when I have my first exposure to Pepper Spray in training.  More than enough time to call 9-1-1.

I hope this post has given some food for thought.  Just like using an RV requires more knowledge than just start the engine and put it in drive, so does carrying a weapon in your RV, be it a pistol, shotgun or a rifle.

Posted by Paul and Marti Dahl at 2:04 PM