I'm Sick Of Looking At Santa, Too!

Life goes on, we have not been able to go anywhere in the Journey since we parked it in the storage lot last July.  Lots of things got in the way, like my back surgery (I'm doing fine) and a battle over the Journey's title between South Dakota and South Carolina DMVs.  Seems the title is electronically maintained in SD and it will take about 5-6 weeks for it to be transferred to SC.  It's already been over eight weeks and I'm ready to do battle again tomorrow.

I have periodically run the Journey's generator and diesel engine to keep the batteries charged and the engines lubed, but it is better to run it on the road.  Since the SD registration expired back in February I can't drive it until I get SC plates on it.  If I hadn't already paid the annual SC vehicle tax of $1800, which the SC DMV requires before they will talk to you, I'd have just renewed in SD for a fraction of that.  DMVs are never fun to deal with, no matter what state.

So I'm keeping busy volunteering at the USO and our church (rode herd on a bunch of middle schoolers today at an after school homework helping session, and boy am I worn out!).  We have taken two car trips to NJ (750 miles one way, boy do we miss the Journey...and its bathroom) to visit my dad who is having some health challenges and our son Corey's family.

There are a few new faces in the family, daughter Heather got a new puppy, a rescue.  Colby is his name and he is the sweetest little guy. 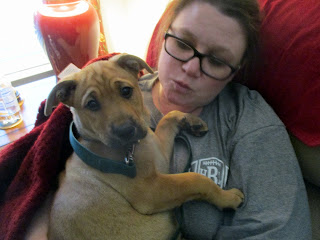 Corey got a new dog last year, a rescue from Georgia.  He was supposed to be a mix of Bloodhound and Lab, after DNA testing, he is a mix of American Bloodhound and other breed(s) undetermined.  He is the size of a small horse, but the most gentle dog you'd ever want to meet.  Here is Colt. 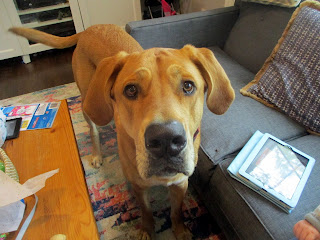 Another new addition is Jackson.  He is grandchild number NINE!  We need a spreadsheet to keep track of all the birthdays now!  We can finally say he is the Caboose. 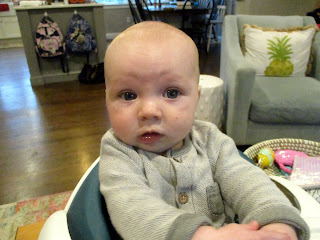 Marti is already spoiling him. 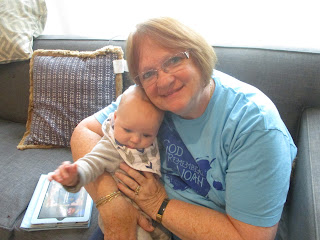 Jackson has two big sisters, Anabelle and Lizzie.  Anabelle is showing her artwork at a school art show.  Yep, that's a cast on her arm, she broke her elbow playing on the monkey bars at school.  She's a tomboy. 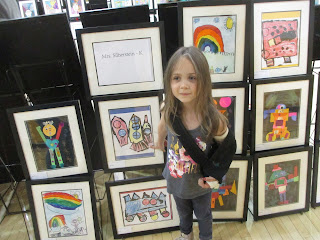 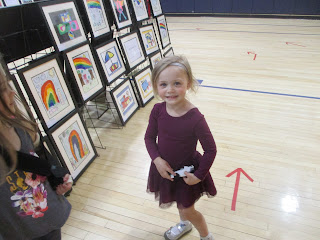 While we we visiting, Corey and DIL Amanda ran a 5K race with the girls at our old home area of Sandy Hook, NJ.  Jackson was so bundled up he had a hard time cheering them on. 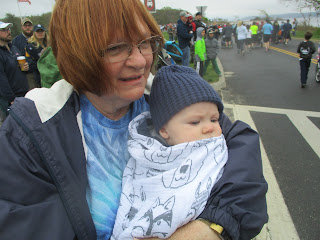 After the first lap, the girls had enough and joined us as spectators.  Corey was happy.  In fairness to Anabelle, it's hard to run with a cast from your fingers to your shoulder. 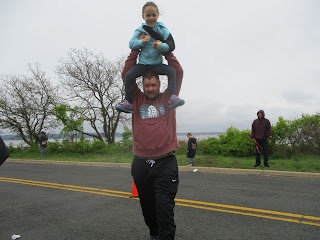 Lizzie stuck it out with her mom and made it on her own two feet. 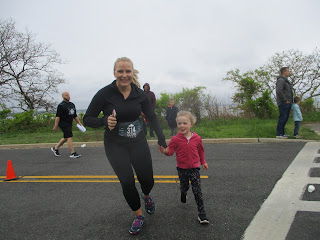 Later, after the race, we walked around Sandy Hook, where we lived for 11 years while I was stationed there in the Coast Guard.  Sandy Hook is a 7 mile long peninsula pointing at the mouth of New York Harbor.  There are many old gun emplacements all around the Hook from days when the Army had many cannons guarding New York.  The decommissioned base, called Fort Hancock, is now a part of the National Park Service's Gateway Recreation Area.

Lots of memories from our walk, our three kids still consider it home after growing up there.  The girls enjoyed hearing stories from Corey about how he, his brother Ryan and their friends played on all the crumbling gun emplacement structures that time has worn down.  I'm glad I didn't know that at the time and even more glad they survived without a pile of concrete falling on their heads. 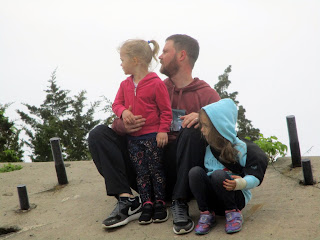 Before we left, we wanted to get some family pictures.  Amanda and her kids. 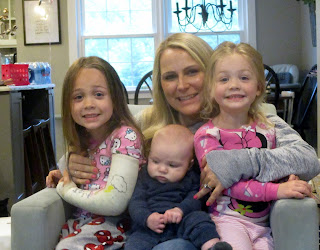 Corey, Marti and the kids.  No matter how hard you try, someone is always unhappy at too many pictures being taken! 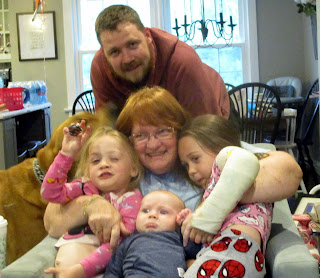 
Insert picture of South Carolina License Plate when I finally get one!!!!
Posted by Paul and Marti Dahl at 7:38 PM 11 comments: