Holy smokes, Batman!  I gave the new format a try this morning and it doesn't work.  Couldn't open a new post window and the feed back box wouldn't open either.  I guess the brain trust that came up with this "better" Blogger forgot to make it even work.

Oh well, an update about how we've been doing lately.  As I posted before, we were care taking my 98 year old father in our stix and brix home for almost two years.  Sadly, he passed away just before Christmas, peacefully, which we're thankful for.  Marti and I were with him right at the end in the ER where he was being checked for heart pain.  We talked and joked for almost two hours, then he closed his eyes and was gone.  I'm grateful we were with him and he didn't pass alone.

One of my favorite pictures of Dad a couple of years ago, he always was a character and wasn't afraid to have fun. 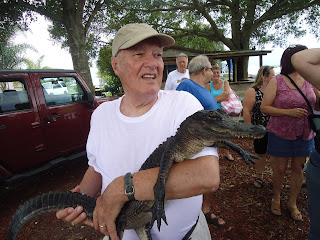 Now we've dealt with estate issues and have finished getting his house cleaned out and sold, just one messy issue left with his remaining bank account.  Dad had updated his will back in 2016 and gave each one of my siblings a copy but we couldn't find the original, we don't know what he did with it after an exhaustive search.  The bank will not release his funds remaining in his bank account without an original will.  I'm dealing now with a lawyer going through probate.  It's complicated because he was  a NJ resident and the will was drawn up there, but since he stayed with me in SC the last years of his life, it is considered his residency here.  So we're dealing with two state courts to get it settled.  As if one isn't enough.  😵

The Journey sits in our storage lot.  I visit it every couple of weeks and either run the generator under load for a couple of hours or take it for a spin up and down the highway for a good run.  The Corona virus had really put a hold on our plans.  I was going to take the Journey up to the Winnebago factory in June for a replacement of our slides seals, they are leaking and then a cross country trip to CA in July for a family reunion with all our kids and grand kids.  That ain't happening now.

We really were looking forward to it because it's been years since our three kids were together and some of our 9 (!) grand kids have never met in person.  Our daughter, Heather and her two boys lives two miles from us here in SC, our son Corey lives in NJ with two girls and boy and son Ryan lives in CA with his four girls.  Ryan is in the Coast Guard and is stationed out there, since he has moved every 3-4 years it's been hard to get everyone together at one time, and we were tied down with my Dad.   Hopefully next year we'll be able to make it all work.

Marti and I have been busy up until the shutdown with volunteer work at our church and the USO.  We have been very glad for our subscriptions to Netflix and Amazon Prime TV.  We've really been enjoying lots of British shows, some are funny, some have you on the edge of your seat.  Sad we don't have that quality of TV shows in the U.S.

We're well and comfortable and at time miss traveling, but this virus thing will pass.  Hope all is well wherever you may be.