One item I absolutely love on our Winnebago Journey is the Ice Maker in the Norcold refrigerator.  I am an ice junkie, I can't get enough of it.  I usually fill my cup with ice all the way to the top and then add the drink.  Ergo, I like a little Diet Coke with my ice.

The ice maker is a wonderful device.  Of course, when I pick up the Journey from the storage lot, it takes about a day before it makes ice, then it really makes ice.  The refrigerator has to running on electric and the temperature in the freezer has to be below 32 degrees (F) before it will work.  It doesn't produce ice when running on propane. 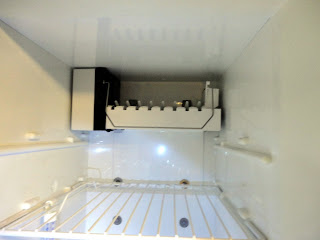 For a while now, the ice maker has been off its game.  It still produces great amounts of ice cubes, but it started giving out a little unwanted bonus, an ice stalagmite (up side down icicle?).
The ice maker developed a leak and when the tray would refill after dumping the newly made cubes, it also dripped a little water from underneath the unit.  It dripped between the black plastic housing and the little gold rectangle in the below photo. 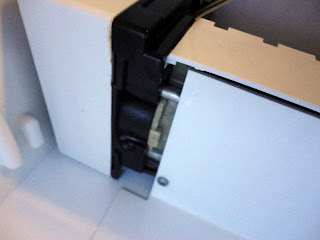 It wasn't a huge problem, but over several days, half of the ice cubes in the ice catch bucket would be frozen into a big block of ice, way too big to fit into my cup.  Darn!
I researched the issue and the ice maker was not repairable.  Further research revealed that there are only two ice makers made that all refrigerator manufacturers use.  The good news was that they are readily available at, where else?  Lowe's (and Home Depot).
The ice maker for my Norcold was in the following picture, Lowe's had four in stock and it cost $49. 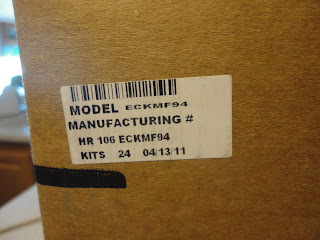 The ice maker is held in with four self tapping screws and two regular screws.  It came apart quickly.
Pulling the unit out, it had a couple of wires plugged in to it.  The wire plug is held in place with a clip.  To get to the clip, you pop the white end cover off, it pops off easily. 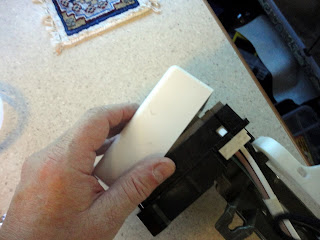 You can see the wire plug lock in the below picture.  Push it in with a small screwdriver to get it to release the plug and you can pull the wires out. 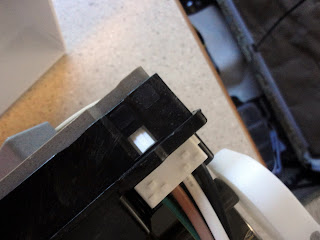 This is what you have with the ice maker removed.  In the right top you see the water fill pipe and below it is the wire harness. 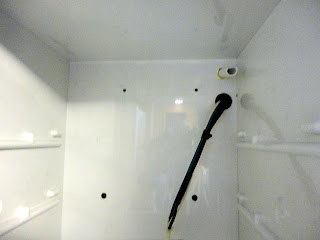 The original ice maker, in the below picture shows a square opening where the fill pipe comes into it. 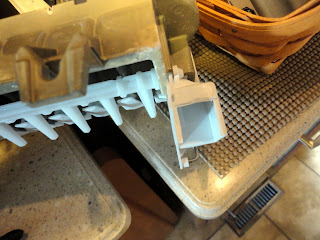 The new unit has the fill pipe opening closed, you see the square where the material needs to be removed to fit the fill pipe. 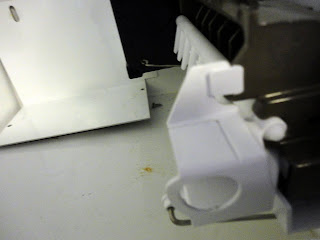 It clips out easily with some cutting pliers, or a razor blade. 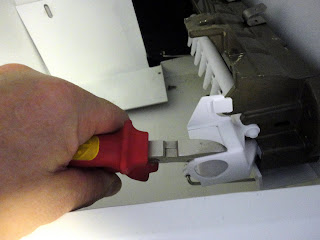 Then it is just plug in the wire harness, put back all the screws and you are good to go. 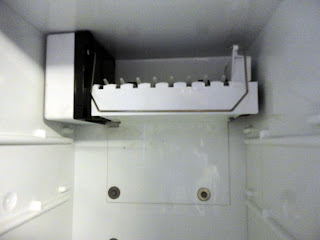 Removal and replacement took about 45 minutes.    Now I won't have any warm sodas. :c)
Thanks for visiting and feel free to leave a comment.