Some Things We've Never Seen Before

Our Fulltime RV life is always filled with the opportunity to see (and often do) new things we've never done before.  Of course, we've done lots of painting in our previous working lives (and there is still more painting ahead for us, if it ever stops raining).

Here at our winter workamping site at the J. Strom Thurmond Corps of Engineers Project in Modoc, SC, we have the ability to be relatively close to our two grandsons, Andrew and Owie (Owen), just a 95 mile drive to their home.  We enjoy getting to see them and their parents often for special occasions.  A recent occasion was to see Andrew perform in his school's Christmas concert. 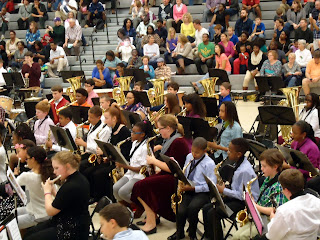 Marti and I both played in band during our school days, Marti on the alto clarinet and me on the tenor sax.  Good times, good memories. 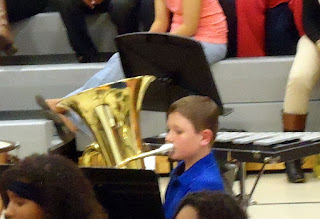 Yep, that's a tuba!  Good for him, reaching out and trying something new instead of following in his grandparent's footsteps.  It was a really good concert, seeing Andrew play was certainly something we've never seen before!   :c)
With all the heavy rains we've been having here thanks to a strong El Nino, Thurmond Lake is now way over it's normal high water mark.  Right outside our door, we can see the waters pushing up well into the woods around the shoreline. 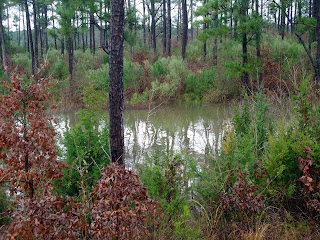 With the high water level, the danger is the continuing rains will cause the Thurmond Dam to be "over topped", meaning the water will flood over the top of the dam causing uncontrolled flooding down river.  The dam has 7 turbines that have been running 24 hours a day venting lake waters thought the large ducts to help lower the levels, but it hasn't been enough.  To put it in perspective, they rarely run all seven turbines at the same time except during summer high demand electrical loads.  Normally just a few run at a time.
To prevent the over topping, the COE dam operators have had to open the floodgates on the dam to allow water to escape at a controlled rate to prevent floods.  It's a delicate operation and has to be done in concert with the other two COE dams on the Savannah River.
Marti and I drove to the dam to see the sight, another thing we've never seen before in our three years workamping here. 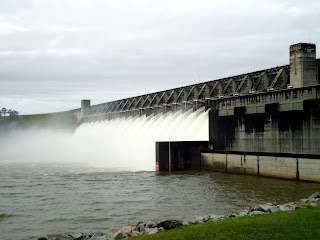 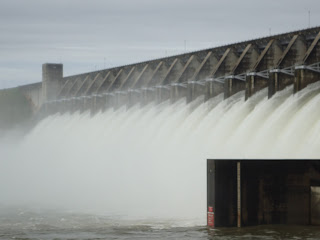 The power generating turbines are located in this structure and vent deeper under the river, not quite as spectacular as the floodgates. 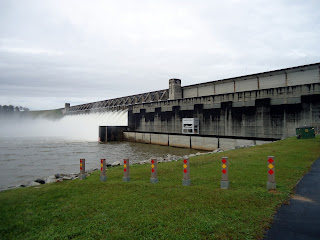 Since we've never seen this before and don't know when we'll see it again, we had to do the required "We were there" selfie. 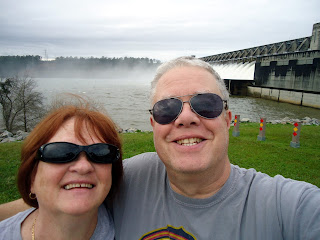 We're looking forward to seeing interesting things in the New Year.  We wish all our readers a Happy and Healthy 2016!

Posted by Paul and Marti Dahl at 1:12 PM