Keeping Our Heads Down

We stayed at the Bull Run Regional Park campground last weekend and since I'm using up my accumulated vacation time we decided to stay the week and through next weekend.  Bull Run CG is nine miles from our house and a little less to Marti's office (poor lass, she still is working), so it is easier to stay in the Journey here and not have to worry about putting the house in show condition every morning.

I was lucky when I went to the campground office to get a site.  Seems like war has come to the area, the Civil War that is.  This upcoming weekend at the Bull Run Battlefield National Park they are re- fighting the first battle of the Bull Run (there were two fought here) to remember the 150th anniversary of the battle and the Civil War.  Bull Run NP is adjacent to the campground.  Civil War soldiers were probably the first ones to ever camp here. 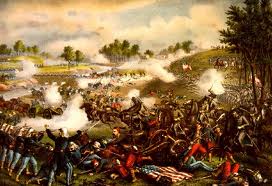 The campground will be loaded with reenactors who have come to participate in the battle's anniversary.  Of course, this time, the soldiers will be here in their air conditioned RVs instead of on foot, horseback and tents.

It should be interesting, with all the different uniforms and period costumes around the campground.  I am wondering if the Union forces will again be defeated by the Confederate army or will they prevail this time.  You see, there are two major roads that cross the battlefield and there is a traffic light that was put in at that intersection some years ago. 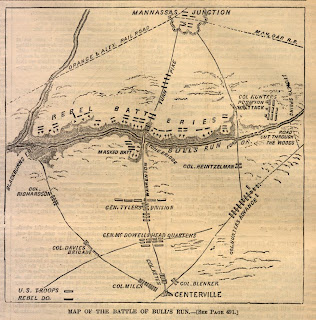 That light might slow the Union forces down about as they attack Stonewall Jackson's position... ;c)

For you history buffs, you can read about it here:  First Battle of Bull Run

As for us, we'll keep our heads down.  You never know when a stray bullet might come your way!