Two years ago yesterday (5 December 2011) we set off on our new course in life, as full time RV travelers.  It seems like just yesterday I was waiting outside Marti’s office in the Journey with the engine running waiting for her to leave and hop aboard.  She finally broke away from the job that had consumed her for years an hour late and we took off for Astoria, Oregon, to spend Christmas with our son Ryan, DIL Amber and our (then) two granddaughters Taylor and Kierra. 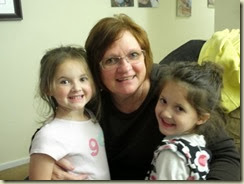 Little did we know that the first three days of our trip we’d spend at a Freightliner Dealer waiting for a bum alternator to be replaced. 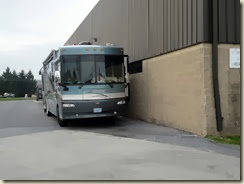 We did make it to Astoria and spent Christmas in their driveway with the Journey all decorated by Marti and the girls (with a wee bit of help from me). 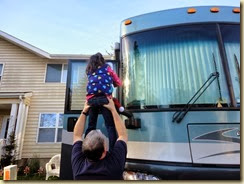 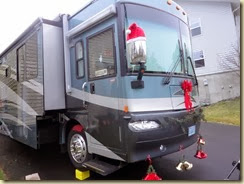 We did a lot of traveling all around the U.S. and by the end of the first year, we had traveled 18,500 miles.  We had a ball and looked forward to another fun year on the road.

We spent our second Christmas (2012) near our daughter Heather, SIL Brian and grandsons Andrew and Owie’s house.  The boys helped us get the Journey all ready from Christmas. 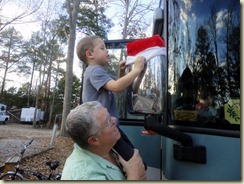 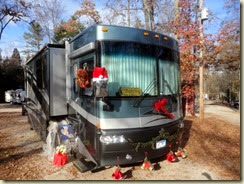 Little did we know that we’d end up “grounded” and almost stationary in South Carolina for more than a year.  I had a bunch of medical issues to deal with at the Veterans Administration (VA)Hospital in nearby Columbia, SC.  The waiting for appointments, over which I had no say in the scheduling, kept us from wandering too far.  We did do some short trips, but never too far away in case an appointment suddenly popped up (and they did) with little advance notice.  This past year we’ve traveled less than five thousand miles, if this keeps up, I’ll be losing my PDD club membership…

We took a new tack in October and took a position as workampers at the J. Strom Thurmond Army Corps of Engineers Recreation Area, about an hour and a half drive to the Columbia VA.  We’ve had a great time with the rangers and the other workampers.  The jobs we’ve been given to do have been interesting, educational…and fun!

However, our plans to head to Florida starting in January have gone out the window as I still am awaiting a final appointment at the VA for some MRIs.  Hopefully we will be finished with all this waiting so we can head to Missouri in late April to welcome another grandchild at Ryan and Amber’s newest home (their fourth, after three beautiful girls, Taylor, Kierra and little Rebekah, we’re all pulling for a boy).

So the Journey is once again decorated for Christmas. 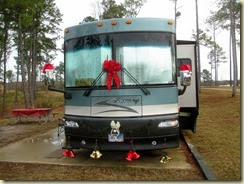 Hopefully mid next year we’ll be footloose and fancy free.  Lots of miles to drive and places to see.  We haven’t made too much of a dent on our Bucket List and we need to change that!

In the mean time, Marti is enjoying her early Christmas present.  A Yamaha electric piano.  She has been missing playing piano since we sold the house and shipped our piano to our son Ryan’s home in Missouri.  A real piano wouldn’t quite fit in the Journey, but this one was the perfect “fit”, easy to set up, easy to take down and it will slide under one of our couches when we travel.  Happy, happy, happy is she (and me!). :c) 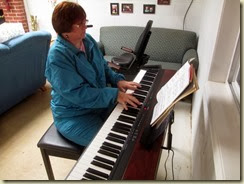