Unlike the last time we worked on inspecting footpath bridges in the pouring rain and sleet, we lucked out and had a beautiful, sunny day.   It just boggles the mind how much is involved in running all the campgrounds, day use areas and boat ramps at the J. Strom Thurmond COE.

We were able to consolidate tasks, because the area around Thurmond Lake is so vast, to save time, we also loaded up a bunch of computer equipment to re-equip the gate houses at many of the places we were going to today.

Inside the Thurmond Dam is a large storage area where the equipment is stored.  It took a while to dig out all the ones we were going to take along with us. 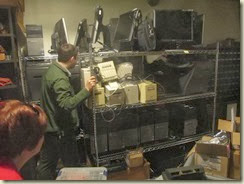 Once loaded up we headed out.  We stopped at the gate houses, 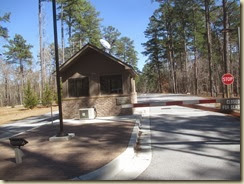 unlocked the doors, turned off the alarms and placed the gear inside. 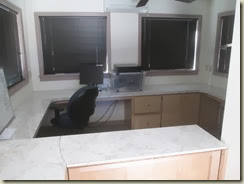 We drove around the areas carefully.  Since most of the campgrounds are still closed for the season, the roads are covered with leaves and pine needles, making it difficult to see where you’re going at times.  We had a nice vehicle, so we picked our way extra carefully along the roads, I sure wouldn’t want to bend a fender on it. 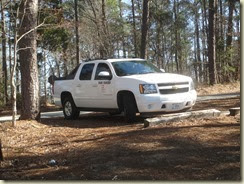 Most of the footpath bridges are in great shape. 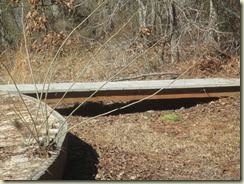 Still, we ran across a few that needed rebuilding. 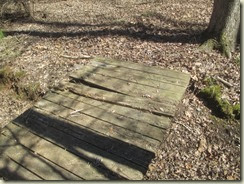 It’s important to find the damaged bridges so they can be rebuilt prior to the campgrounds opening.

One of the challenges (pains in the butt) of doing this job is the many closed gates that are in various places in the campgrounds.  Over the years, the locks on the gates have been changed and changed again, leaving few standard locks. 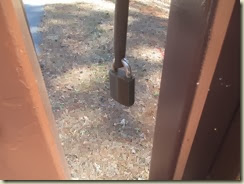 To be able to get into all the areas, I had to have a large assortment of master keys.  So many keys, in fact, that if I fell in the water, I’d sink right to the bottom (even with a life jacket!). 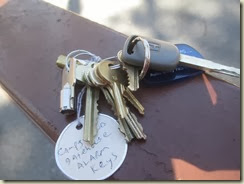 One more day and we’ll have all the 40 footpath bridges inspected.  It will be great to get this off our plate and move on to another task, whatever that will be.

It’s fun to be out in the woods and enjoying nature.  There have been several reports recently of Bigfoot sightings in the area.  We always keep our eyes “ripped” (as Owie calls it) but so far, Bigfoot has remained elusive.  We did find this, though (really) alongside the road to one of the campgrounds: 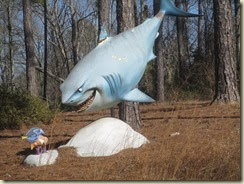 Posted by Paul and Marti Dahl at 6:55 PM