Yep, our Splendide 2100 washer/dryer died.  Once I removed it, the cause of death became readily apparent.  Lint build up in the dryer vent hose. 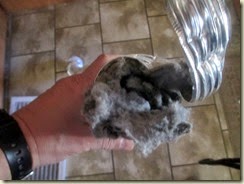 But how did that lint build up so much after I regularly used a brush from the outside dryer vent to clean out lint?  Looking carefully around the compartment under the dryer, I found that the vent hose had at some point come off the dryer vent. 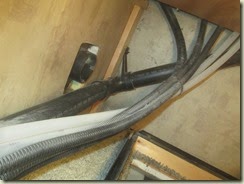 When the hose came off it rested against the wall, effectively blocking any tiny amounts of lint from exiting the Journey.  What threw me was when I used a cleaning brush into the dryer vent from the outside, I never got any lint because I wasn’t in the vent hose at all.  Live and learn.

Because the dryer was over 8 years old and the parts to repair it cost more than half of what a new unit cost, I bought a new Splendide 2100XC from PPL Motorhomes in Houston, Texas at a great deal.  This unit has a larger drum to handle larger loads.  Even better, there is a technique that can be used on this unit to flush any lint out of the drum, something that was not possible on my old unit.

I knew this was going to be a big job.  The washer weighs in at a healthy 155 pounds, so it required some extra muscle.  Several of the guys here at the Volunteer Village stepped up to help me move out the old unit and bring in the new one.  It was a tight lift just getting in and out of the Journey’s entry door.  That extra muscle sure helped out.

Before I started to remove the old unit, I took off all the cabinet doors and hardware, then I put a layer of duct tape on the edge of the cabinet to protect the wood from being scratched. 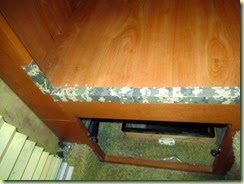 Once the old washer was removed, I found some sloppy construction hidden behind the washer, hanging wires and loose PVC pipes.  Because the PVC pipes are hooked to drain into the gray tank, it wouldn’t be too much of a stretch to see they would crack somewhere someday making a massive leak. 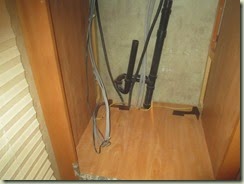 I took the time to properly secure the wiring and used a clamp to hold the PVC drain pipe in place to prevent it from flopping back and forth. 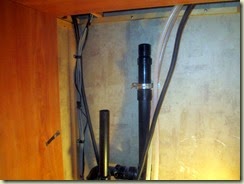 I also replaced the vent hose with a new hose and properly secured it.  It was a really tight space to work and probably was never fastened correctly at the factory. 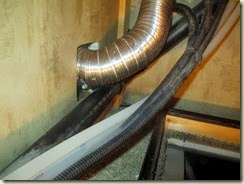 All set for the new washer/dryer. 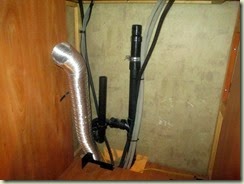 There it is, all in place and running for the first time.  I checked carefully for any leaks and all connections were tight and dry. 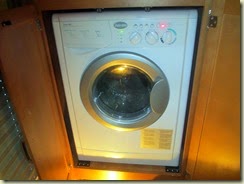 Lastly, I color coded the hot water hose with a little red tape so I’d always know which was hot and which was cold. 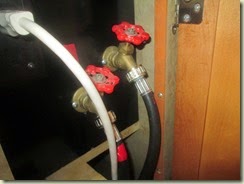 Not a fun job, it took me a good part of the day to remove and replace the washer unit, but I’m sure glad it’s done and I know it was done right.  I now know I need to keep an eye on the through wall connection, something I’ll do monthly when I change the nearby air conditioner filter.

This DIY project would have been an easy $500 worth of labor at an RV dealer, so I’m glad I tackled it.  Plus it’s nice to have clean skivvies again.  :c)

Posted by Paul and Marti Dahl at 8:00 PM