We’re into the closing days of our “tour of duty” for this year at J. Strom Thurmond COE project, but that doesn’t mean we’re bored or doing the same old thing.  In fact, we learned something new, who says you can’t teach an old dog new tricks?

As part of the COE’s dedicated effort for water safety, we had a dozen decals with a water safety message made up to be placed in the windows of all the gate houses around the lake. 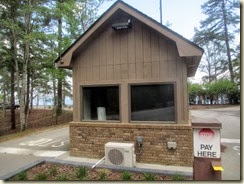 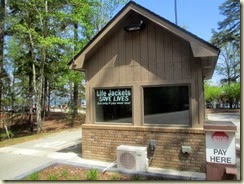 We’d never done this type of work before, but found it wasn’t too complicated as long as we took our time and applied the lettering very carefully to a squeaky clean window.

First, the one side covering of the lettering is peeled off exposing the sticky side with the letters. 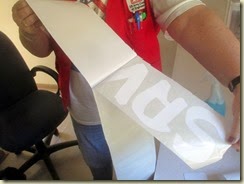 That side is placed on the glass, then carefully rubbed with a smooth plastic tool.  All the air bubbles are worked out and the letters stick tightly to the window. 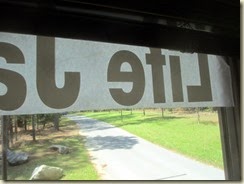 Then the backing is slowly peeled off, leaving just the letters. 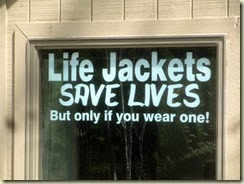 Of course, there had to be one gatehouse with non standard sized windows, making the decal too big to fit. Oops!! 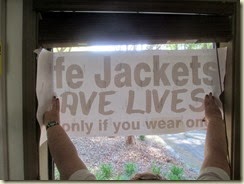 We’ll have to figure out a way to fit this one on, maybe by cutting the decal up into individual letters and moving them closer together.  But that’s a job for another day.

Because of the wonderful warm weather we’ve been having here lately, the beaches have been swarmed with visitors.  Because the gate houses are not officially opened, the self pay stations are being used.  People get so confused and can’t follow the clearly posted directions on where to put the paid envelope in.  They kept coming in and asking us as we were working on the lettering.  It got so bad, we had to take action and help the people to see where to put their envelopes. 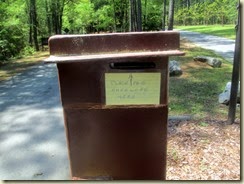