After two glorious days at sea, we arrived in the Virgin Islands.  First stop was in the British Virgin Island of Tortolla.  We were blown away by the mountainous beauty and the stunning color of the water. 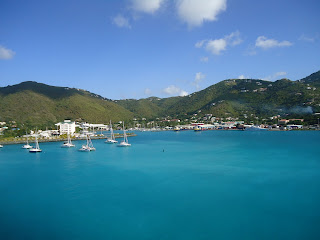 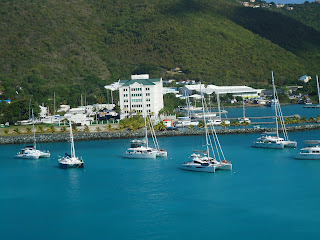 We enjoyed watching a pod of dolphins playing in the water around the ship.  Of course, they were too fast for my fumbling attempts to take their picture.
We signed up for a water and land tour of the island.  It was several hours long, starting out with the boat tour first. 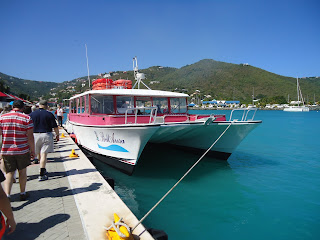 The boat sailed around the many islands that make up the BVI.  One island had many caves open to the ocean.  Snorkelers were able to swim into the caves. 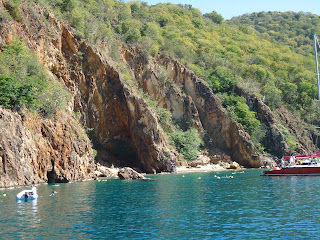 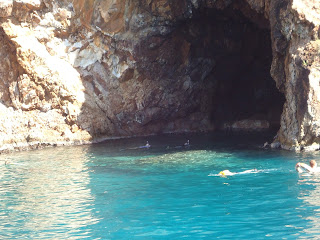 Some of the islands had homes on them, 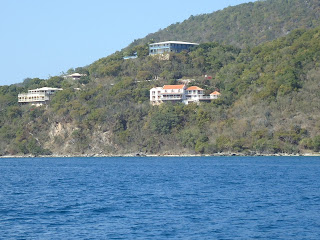 others were wild and uninhabited. 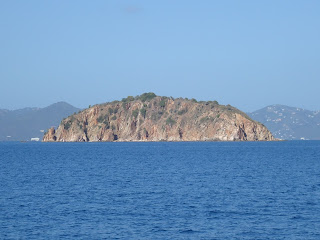 One island is owned by Richard Branson, the billionaire who owns Virgin Airlines.  You can rent out his house for a mere $65,000 a night.

The boat tour ended in a marina that had many expensive yachts, including this unusual looking one. 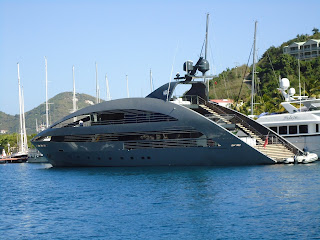 After a bit of perusing some of the local shops, we boarded a open bus type vehicle for a ride around the island roads. 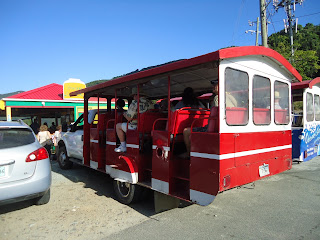 The island's roads are really steep and twisty.  The driver was very scary, he drove like he was in a race car in the Indy 500.  We had to hang on for dear life at times, at one point he almost ran us head on into a bus when he blew through a stop sign.
Thankfully, we did have a number of stops around the island where we could take in some of the amazing views and let our heart rates return to normal. 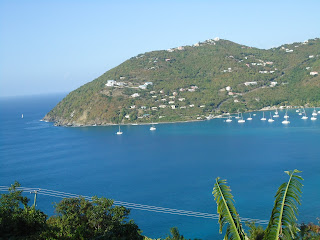 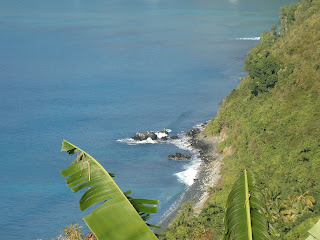 Hey, isn't that our ship down there in the harbor? 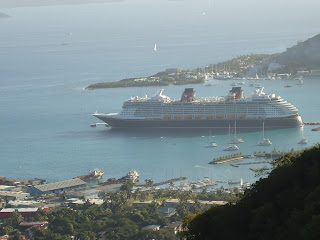 After our tour, we were dropped off at the pier and walked back to the ship.  When in port, there are crewmembers scrubbing down the ship non stop to keep it gleaming.  The ship has a device that moves about the sides of the ship to allow workers to reach much of the hull for washing. 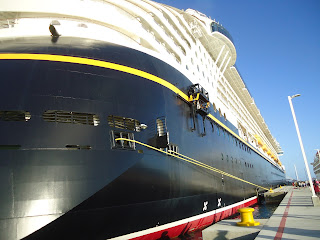 The ship was in port on Tortolla for about nine hours, not a lot of time to see all of the island, but with the tour we took, it gave us a good flavor to put it in future travel plans for a revisit when we can stay several days to enjoy all the island has to offer.
Next up, a tour around the Fantasy as we sail to our next port of call on the U.S. Virgin Island of St. Thomas. 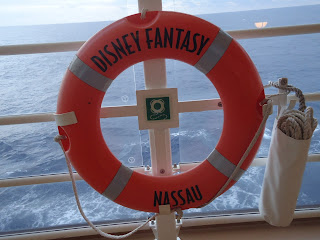