St. Thomas And A Surprise Ending

Leaving Tortolla, we cruised overnight and awakened in the port of St. Thomas in the U.S. Virgin Islands.  I'm continually amazed at how smoothly and quietly the captain of the Fantasy was able to maneuver and dock the 1100 foot ship, you almost don't know it's happening. 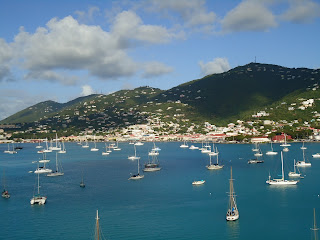 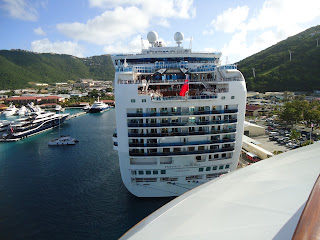 On every cruise we've been on, there are tours and excursions offered by the cruise line.  They are fun, but sometimes can be a little pricey.  We decided not to book any tours in St. Thomas, but just to explore the island on our own.  Shortly after leaving the ship, we found an island tour that was about half of what was offered on the ship.  We jumped on it and had a two hour ride around the island in another open bus. 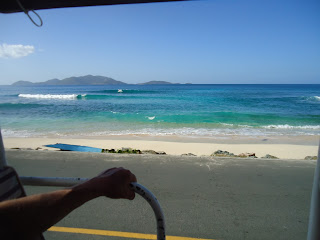 St. Thomas is a little more populated that Tortolla and has many of the same stores you'd see stateside. 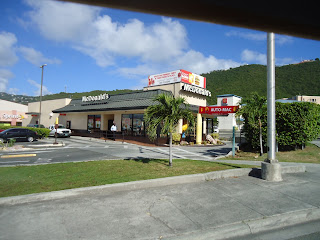 But there was plenty of nice wild scenery to view also. 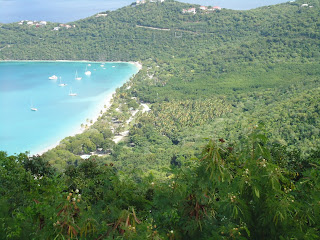 An old castle from days gone by. 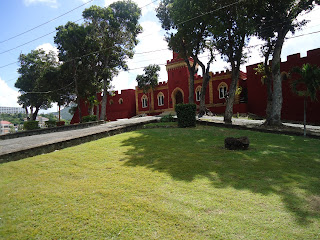 Lovely beaches for a swim, or to wade in the crystal blue water. 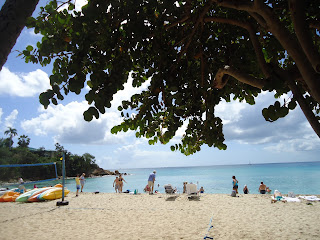 Many places had beautiful hedges of flowering bougainvillea. 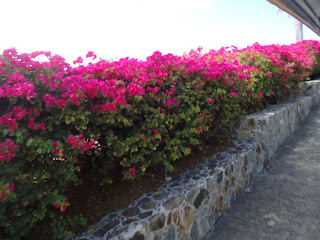 St. Thomas is working to reduce its dependence on fossil fuels by building this huge solar farm.  The tour guide said it has helped cut the islander's electric bills by a third. 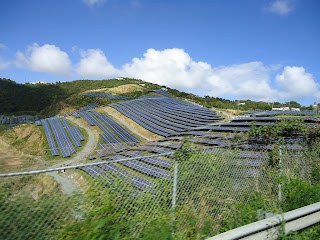 We returned to the ship after the tour and a bit of shopping.  We watched a pirate ship slide by. 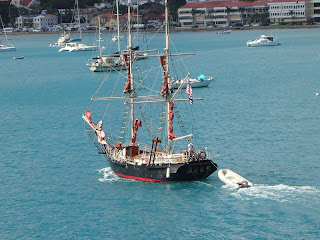 We noticed some divers alongside the rear of the ship, we wondered what they were doing, and assumed it was some routine cleaning thing.  We'd find out what they were there for after we sailed.
Walking back down the pier to the ship, we again saw cleaning and painting going on, even Dumbo was flying around the stern touching up some lettering. 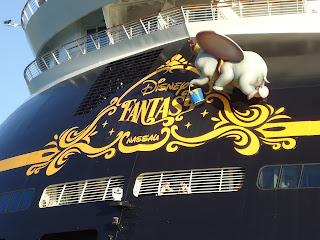 After about eight hours in port, we got underway again.  In another display of incredible ship handling, the captain maneuvered the Fantasy sideways from between the two Princess cruise ships using the bow and stern thrusters.  We were on our way out of the harbor and on to our last stop at Disney's private island, Castaway Cay for a beach day.  So long, St. Thomas, we'll be back again some day for a longer stay. 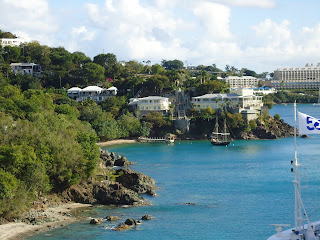 Shortly after we were out of port, the captain came on the loudspeaker with an announcement.  The Fantasy had suffered an engineering problem on one of the two propeller shafts and it had to be secured.  Because of the trouble, the ship could only proceed on one propeller, slowing down its speed.  That meant that the stop at Castaway Cay had been cancelled and we were heading straight back to Port Canaveral.  It was more important to get back there on time for passengers who had flight reservations and boarding of new passengers for the next trip.  Plus there were repair parts and teams there to effect repairs to enable the ship to operate at full, normal cruising speeds.  Ah ha!  That's what the divers were doing at the ship's stern, checking out the issue.

As a compensation, Disney granted each stateroom a $200 credit, plus a 20% discount on another cruise anytime in the next 24 months.  Very fair.  Even though we were slightly disappointed at missing the Castaway Cay stop, we were very happy with the compensation.  Yep, happy enough to book another cruise on the Fantasy for the same time next year.  :c)

There was still plenty to do on the ship as we headed north, more great shows, interesting things to find as we explored places we has never been to, like this Vespa sidecar.  I guess Mickey can use it to zip around the ship. 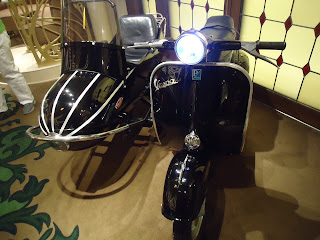 We enjoyed looking at the artistic details found all over the ship. 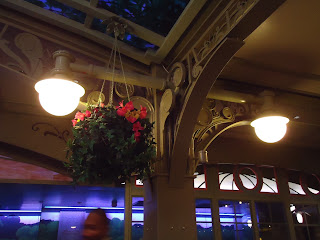 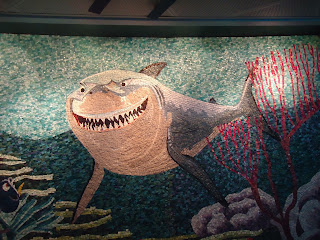 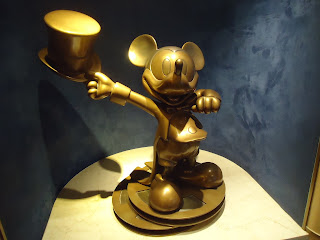 Some artistic details were waiting for us on our bed each night. 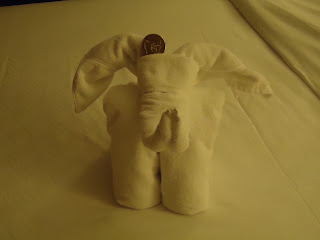 Not to forget the great deserts after the meals.  I had to have a traditional Mickey Bar the last night. 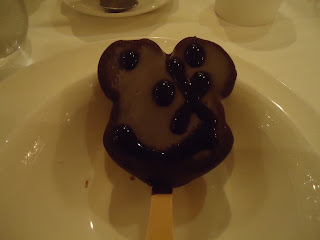 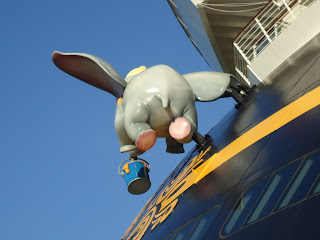