Generations that is.  My dad stopped in to visit with us at our South Carolina “home” for a couple of days before continuing on his trip from his house in New Jersey to visit his brother in Florida.  We got a nice picture of our four generations together. 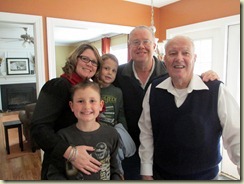 It was about the half way point in his drive to Florida.  A nice breaking point.  We had a great time with him.  Andrew and Owen taught him some new games. 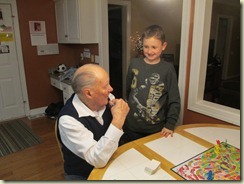 Here we are playing Candy Land.  Guess who won? 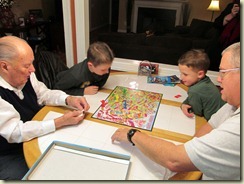 It was me, for a change.  After regularly getting smoked by Andrew in chess and Owie in checkers, 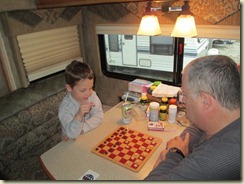 it was nice to taste victory for once.  Maybe Candy Land is a game on my level?

Dad was introduced to the game that has become a family addiction: Bananagrams. He liked it so much, he went out and bought the game for himself. 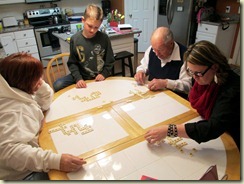 Dad is a linguist and taught Greek and Hebrew in college for many years.  The boys latched on to him and learned to speak and write a little Hebrew from their great grandfather. 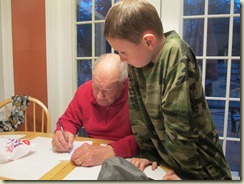 We’ll see him when he drives back through in a week or two.  He has a new car on order.  Yes, he is replacing his red Pontiac convertible with another car, a Mazda Miata convertible.  He is 91 and we are all wondering when he is going to grow up and act his age… ;c)

Andrew and I got to spend some time working on his birthday present from us, the Visible V-8 engine model.  He is fascinated by how things work and proud of the progress he’s made so far, almost finished with the engine block. 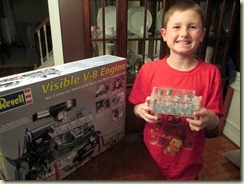 I’m still waiting on that eye appointment from the VA.  We’re seriously considering to ditch their “help” and having me get the surgery on the outside civilian world.  We’ve already been sitting for almost three months, we’ll be here for sure another month.

It’s not good for an RV to sit in one place too long. 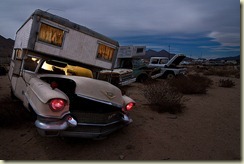 Plus, I’m afraid I’ll lose my PDD touch if we stay in one place too much longer!

Posted by Paul and Marti Dahl at 2:26 PM