I Think We Need To Buy A House

It’s been one of those trying days.  One where all the good intentions and plans went right out the window.  It’s not even a two steps forward, one step back occasion, we went backwards what appears to be several miles.

At five am, we rolled out of bed and shortly thereafter were on the road to the VA hospital.  Today was the day we’ve been waiting six months for, my cataract surgery.  Finally, I’d be able to see straight again and regain my depth perception.  I noticed it most trying to put toothpaste on my tooth brush.  Always seemed to get the sink before I got any on the brush.

We arrived at the VA hospital at six fifteen and went to the operating room waiting room for my six thirty appointment.  I checked in and shortly the OR nurse came and led me back to the pre-op room.  As usual, I had my chronic cough from my damaged lungs and the nurse was concerned.

I told her I had been cleared last week by the pre-op doctor even though I brought up my lung condition and chronic cough.  He said it wouldn’t be a problem, they’d give me a mild sedative that would calm everything down so they could operate.  Ok, then.

Well, the OR nurse was very concerned and called in an OR doc to take a listen to my lungs.  He didn’t like what he heard.  A respatory therapist was called in to give me a nebulizer treatment to clear my lungs.  After that was administered, the doc rechecked me and was still not happy with the breathing sounds.  He was especially concerned that I could cough during the surgery and cause damage to my eye, or after the surgery, dislodge the implanted lens by coughing.

Bottom line, my cataract surgery was cancelled.  I was directed to see another physician in the hospital to get my lungs more closely examined.  That turned into about five additional purgatorial  hours waiting to get some blood work done and a CT scan.  I have to wait to see what the pictures show.  As a precaution, I asked to be booked for the next available appointment for surgery in case I’m once again cleared.  The next date?  June 25th.  Uf-Dah! (to quote the saying of our famous bird lady friend, Judy).

What that does is push back our hoped for departure from South Carolina for a few weeks in New Jersey to at least August, now.  If we’re lucky.   And this doesn’t even begin to address my VA disability application.

That’s a whole different issue, still hanging out somewhere.  As an “encouragement”, while at the VA, I met a combat wounded veteran who had his back severely injured in an IED blast back in 2008.  He just was awarded a disability compensation after five years of waiting.  Uh oh, we might never get out of South Carolina.  Maybe we should just buy a house?

The icing on the cake is poor Marti’s cold has turned into a nasty case of bronchitis and even better, she twisted her knee and can barely walk.  Guess where we went after the VA?  Yep, off to our local doctor to have her checked out.  A chest x-ray and a knee exam has Marti cooling her heals on the couch stuffed full of some strong antibiotics and an ice pack on the knee.  Double Uf-Dah!  Fortunately, her knee is a soft tissue injury and no surgery is needed.

But all is not bad, I finally got a chance to wash the Journey yesterday, after more than six months.  The campground does not allow washing of RVs except for twice a year they send a notice around to all the monthly rental sites to wash your RV so they don’t have a bunch of dirty, moldy units making the campground look bad.  I jumped at the chance and spent some serious time giving the Journey lots of TLC with soapsuds. 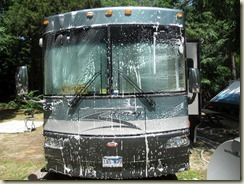 I was glad to get the practice so I can wash Judy’s motorhome as I promised her one of these days.

Now that looks better.  It’s no longer the color of a school bus with all the pollen.  :c) 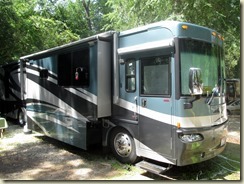 We immediately noticed that the hummingbirds were hitting the feeder we have on the window.  I guess they’re like me, they don’t like eating at a dirty restaurant. 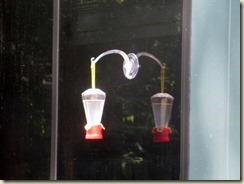 I did manage to kill off my hose, though.  I guess it died from lack of use. 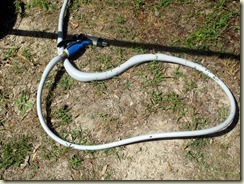 Don’t panic, we’re not buying a house, just a hose.  Sometimes, though, it just seems like we’ll be here forever!  :c(

Posted by Paul and Marti Dahl at 8:22 PM