While we’ve been waiting for our mattress mix up to be straightened out with the mattress company, we’ve been busy working at the J. Strom Thurmond COE.

We spent two days driving almost 200 miles inspecting the “Steel Rangers”, the self service pay vaults at many of the unmanned facilities located all around the lake. 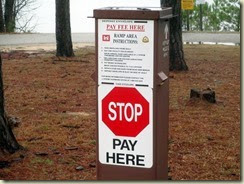 We inspected the stickers on the vaults and also ascertained that there were pay envelopes located in the envelope dispenser slots.  Some of the stickers are worn or damaged, plus many had tape reside on them needing to be cleaned off. 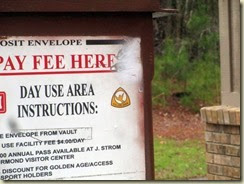 Not a big thing, just a little issue, but taking care of these small items keeps the COE parks, boat ramps and day use areas in tip-top shape.

Yesterday, I called the mattress company again.  I informed the representative that I stopped payment on my credit card.  I was then told to expect a call from a supervisor.  Lo and behold, a couple of hours later, I did get a call!  :cO

I again explained the issue and this gentleman not only apologized repeatedly, but wanted to fix the problem immediately.  He offered  to overnight the correct size mattress and to send an upgraded, more expensive one at no additional charge.

The icing on the cake was he would include two special foam pillows too, as a further apology.  Marti and I wondered if he would be true to his word.

At 4:30 this afternoon, the FedEx truck pulled up with a large box containing the new mattress. 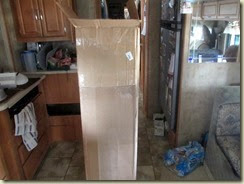 It was much larger than the previous mattress box, as was the rolled up mattress. 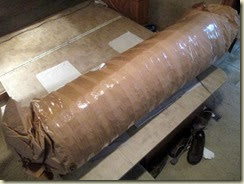 Cutting open the roll, the mattress folded out and began to inflate.  Funny to watch. 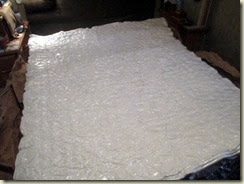 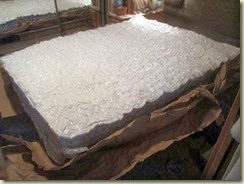 It is the right size and much thicker than what we originally ordered.  I’m  thinking it will be a real good night’s sleep for a change.  Won’t miss that Sleep(less) Number bed at all.  ;c) 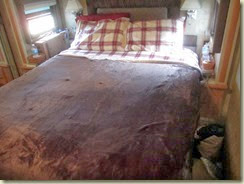 As to the wrong mattress, I’ll be taking it to Goodwill tomorrow to donate it, and get a receipt for it.  All I have to do is snap a picture of the receipt and email it to the mattress company.

The almost?  No apology pillows were in the box.  Maybe they are coming separately, but that isn’t much of a worry for me.

That pretty much wraps up that issue, now we’re looking at our last week of workamping.  Plus, there’s much to do to get ready to roll.  After being stationary for six months, we have lots of things to pack up and remember where we carry them.

I have an appointment next Friday to have four new tires put on the rear of the Journey, the tires are aged out, they are more than 7 years old and the sidewalls are starting to show cracks.  (I replaced the two front tires just before we hit the road in 2011).  Don’t want to have a blowout on the road.  (Our next door neighbor had a rear tire blow out on his motorhome and it did $20,000 worth of damage).

An oil change on the generator and a good overall wash will be done, too.  Once we’re rolling, I’m going to stop at a Speedco shop and get the CAT diesel engine oil and filters changed.

We’re not looking forward to getting back on the road (too much)!