The day before, I took off the hubcaps, 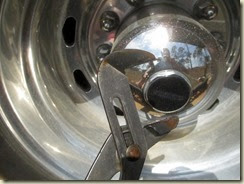 and the lug nut covers so the tire replacement would go faster. 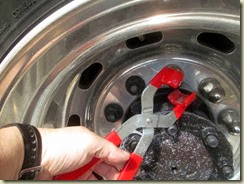 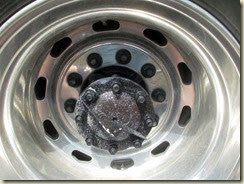 I had ordered the tires last month at a nearby Michelin truck tire dealer and made an appointment to have them installed.  They had me back the Journey into their shop and I was able to lift the rear wheels off the ground using the rear levelers and some blocks.  I had the front wheels chocked so the Journey wouldn’t roll (the parking brake is only on the rear wheels). 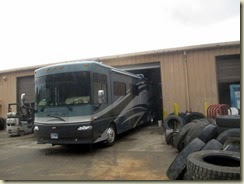 A one inch drive air gun zipped the lug nuts off in mere seconds. 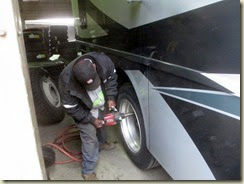 Looking under the Journey with the wheels off, the hub, the brake drum and the airbag are all visible. 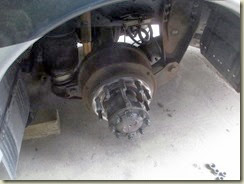 Next one of the techs “broke” the tire’s bead with a special sledge hammer.  He was a good shot, he didn’t miss once.  Maybe he’d done this before”"? 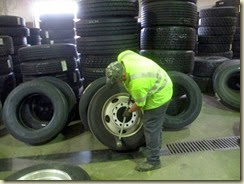 Then a special pry tool was used to remove the tire from the rim. 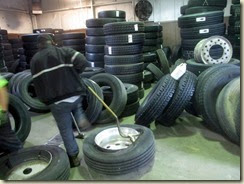 While the tires were off, I had all the valve stems replaced.  Might as well do it while it was easy to do.  A preventive maintenance thing. 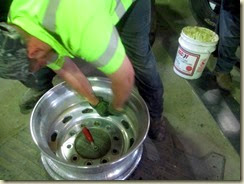 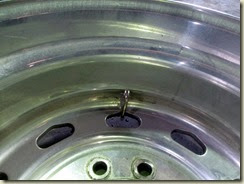 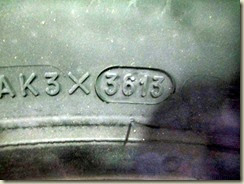 The new tires were slipped on with a long pry bar. 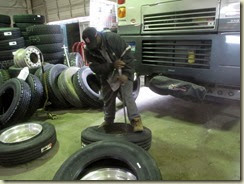 Then each tire was put in this cage to be inflated.  It is for the protection of the tech, just incase the tire, for some reason explodes (it has been known to happen (very rarely) with devastating consequences). 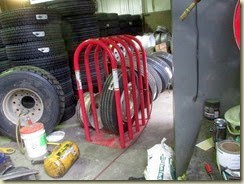 The tires were then put back on and the lugnuts tightened with the air gun. 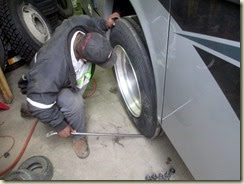 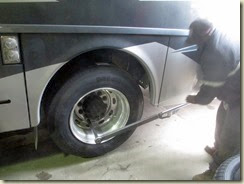 The old tires were placed in the disposal pile.  I looked them over. 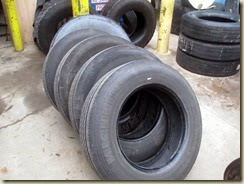 Even though the tread was worn less than halfway (note the wear bars in between the tread), 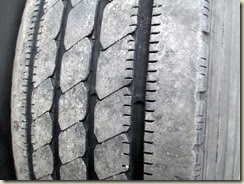 and the inside of the tire casings looked good, 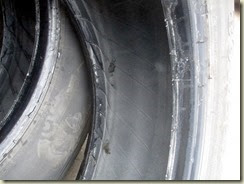 it just wasn’t worth gambling on driving with them.  Peace of mind and safety, you can’t put a price on that.

The end result, the FMCA Michelin Tire Program saved me a little over $200.  More money for fuel which we’ll be needing as we roll next Tuesday.  :c)

I drove back to the COE Volunteer Village in the pouring rain.  Now my new tires need a bath, and the hubcaps and lugnut covers put back on, as soon as the rain stops. 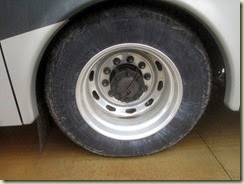