We’ve now moved to our site (#8) at the J. Strom Thurmond COE Volunteer Village.  When we initially arrived, there were no sites available, all were taken by serving volunteers, so we were put temporarily in the nearby public Modoc COE campground until a volunteer left.

The Modoc campground was excellent and for the last several days we were there, we had the entire place to ourselves because it was closed for the season.  Talk about peace and quiet.

The only downside was the Modoc site is just water and electric.  After a little over a week, the Journey needed to dump.  Bad.  But we were able to hang on using water carefully until we got to our FHU site at the Volunteer Village.

We’re now all settled in for the next three months.  A beautiful site right on the lake. 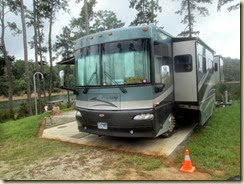 Complete with fantastic sunsets, at no extra charge.  ;c) 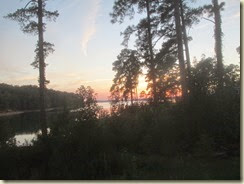 We’ve been putting in our volunteer hours and thoroughly enjoying every task we’ve been given.  We even had a great laugh the other day.  We were driving through a campground on an errand in a COE truck with “Park Ranger” lettering on both sides.  We came across a car deep in the campground that obviously didn’t pay the self serve entry fee of $4.00 because there was no “Paid” tag hanging from the mirror.

They took one look at us and stepped on the gas, flying out of the campground, with all the people in the car looking back at us to see if we were going to stop them.  We have no authority to do any such thing, but they didn’t know it and were in a panic to avoid a ticket.

It was a great laugh for us.  Now if it had been an actual park ranger, the story would have ended differently for them.  :c)

We’re going to go pin hunting (checking boundary line survey pins) in a couple of weeks, but we have a major job to get done, weeding and mulching at the rest of the COE park gate houses that didn’t get finished on National Public Lands Day.

Funny how much I disliked doing that when we owned a house and now I look forward to it.  Perspectives change a bit when you’re a fulltime RV traveler.  ;c)

Since the area around Thurmond Lake is so vast, I decided to get another GPS for use in the COE trucks as we travel around.  We carry a bunch of road maps for both South Carolina and Georgia since the lake is between the two states.  I figured the GPS would come in handy. 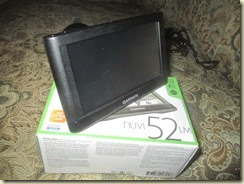 It looks like it will work fine for us, but it was a bit of a struggle to get set up since it didn’t have any maps preloaded.  I had to first download the maps to my computer and then download them onto the unit.  It was a little frustrating with the slow WiFi connection here at the Volunteer Village that sometimes dropped off and then the automatic Windows update that disconnected the download when it did a restart of my computer.  I had to keep monitoring it until it finally was finished.

However, I persevered and got it done, even if it did take to 2 am.  Sleep is overrated, I guess…  ;c)

Posted by Paul and Marti Dahl at 2:37 AM