Greetings all! Welcome to our RV addiction. We are nearing the end of our working lives and are planning on going fulltime in our motorhome. We had hoped to be on the road this summer, but with the dive of the housing market, we have decided to wait to see if it picks up a little bit.


We purchased our current motorhome, a Winnebago Journey 39K in May 2007. It is our fourth motorhome since 1993. It is the third motorhome to wear the license plate "R-SANITY", a name picked out by Marti. When we get away in our motorhome, even for a short weekend, we feel that our batteries have been recharged and our sanity restored. :c)
The Start of Our Motorhome Travels.

Our first motorhome we purchased in 1993, a 1973 Travel Mate 21 foot Class A. A lot of living in a little space, for sure. I was hesitant at first to buy something that old, but it had a new Chevy 350 engine and a full body, high gloss paint job. I was afraid it would be a part time job to keep it running and it was, but it was always small stuff. I was a diesel truck mechanic in a past life, so the tinkering was somewhat of a hobby for me. 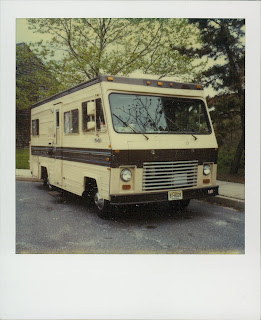 We lived at Sandy Hook, NJ at that time and we took a lot of trips, an Easter trip to Busch Gardens became an annual event. We traveled to some local areas, Round Pond Campground at West Point, NY and even took a couple of extended trips, once to Walt Disney World's Fort Wilderness and twice to Lake George, NY. One of the Lake George trips became known in the family as "The Three Flat Tires Trip".

The Travel Mate had the old split rim wheels and tube inside the tires. Due to the age, there was a constant problem with rust on the rims wearing holes in the tubes and causing blowouts. I changed the tires myself with the help of a long pipe for leverage to get the lug nuts off. Fun stuff! Transfer orders came in 1998 to Washington, DC and the Travel Mate was sold to help us purchase our new home in Northern Virginia. Life changed for a while and we were "motorhomeless". However there was an RV Dealer just nine miles from us and we periodically stopped in to look and drool. :c)

August, 2001 found us in enough good finacial standing to puchase our next motorhome, from said dealer, a new Four Winds 31Z Class C. It became the first motorhome to wear the "R SANITY" license plate. We camped most every chance we could as work schedules allowed and in July 2002, we took our first real cross country trip, Monument Valley to the Grand Canyon, over to Las Vegas, then down to Carlsbad Caverns, NM and home, in 12 days! We made the most of the trip and found most of our pictures were through the windshield. :c) It gave us a flavor of things to see "someday" when we could retire and slow down. 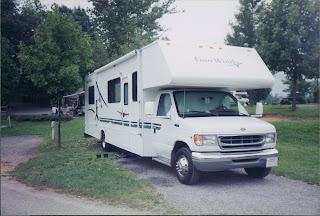 Summer 2002 found me with transfer orders to Buffalo, NY for the following summer. We didn't want to sell our home, so we decided I would go for one year as a "Geographical Bachelor" and then retire. We planned on me living in the Four Winds for that year and then coming home whenever I could. Then reality hit, they get SNOW in Buffalo, and LOTS of it! The Four Winds would not be a capable platform to live in. 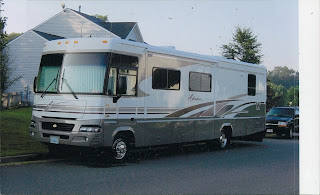 Then a twist of fate occured and I found myself swapping orders with another Coastie that wanted to go to Buffalo (his hometown) instead of Yorktown, VA. I gladly took the Yorktown job and was able to use the Adventurer to live in when I didn't commute back and forth. It was even better, because there was an upcoming promotion coming for me and in February 2004, I was back in the DC area after only 9 months in Yorktown!

Marti and I used the Adventurer heavily during this time and had in our extreme travel lifestyle visited many places, to include Key West, Mount Rushmore, Disney World (that's becoming an annual winter trip), even Quartzite, AZ and Joshua Tree NP in California. We really enjoyed the travels and began to formulate the idea of full time traveling for an extended period after we retired.

We thought that the Adventurer would be fine for fulltime living with some careful packing. But then we realized that we already put 44,000 miles on the Adventurer and by waiting several more years at our current travel rate of about 10-12,000 miles annually, we'd start our travels with 75,000 + miles on the motorhome!

A diesel pusher motorhome was in our future.

There were lots of advantages to a diesel pusher for us.  Along with greater length and resulting more inside room, there would be much more carrying capacity, known as CCC, for all the living gear we'd need.  A better ride with the air bag suspension and a diesel engine that would last miles and miles with good maintenance.

We were very happy with our Winnebago Adventurer and decided to stick with that manufacturer for our next motorhome.  We looked and looked, knowing we had plenty of time to find the right deal. 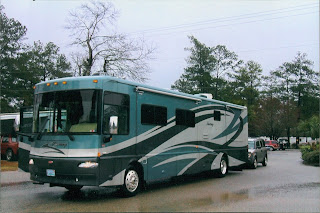 Why was that so important for me?  Well, there were new pollution requirements for 2007 model year diesel engines, which were required to use the new Ultra Low Supher Diesel (ULSD) fuel and had a whole bunch of additional devices installed on the engines to use ULSD fuel and only that fuel .  So along with ALOT more cost for all the engine add ons, you were limited to what fuel you could use.  That meant a future trip to Mexico or Canada, where ULSD fuel is rare, would be fine with my 2006 engine that runs fine on both the ULSD and the older Low Sulpher Diesel (LSD).

We traded the Adventurer and bought the Journey, transferred the "R SANITY" license plates and took her home.  We realized we'd come a long way from our first motorhome.