There are many ways to travel in a recreational vehicle (RV) and one size does not fit all.  Fortunatly there are many options for people to choose from.

Marti and I started out really simply, we went on our honeymoon to Disney World in August 1977 on our spanking new 1977 Honda Goldwing motorcycle, complete with a pup tent and a "Just Married" sign below the license plate.  We could tell how people who passed us on the highway viewed marriage, happily married people would see the sign and beep and wave.  Unhappily married people just ran us off the road! :c) 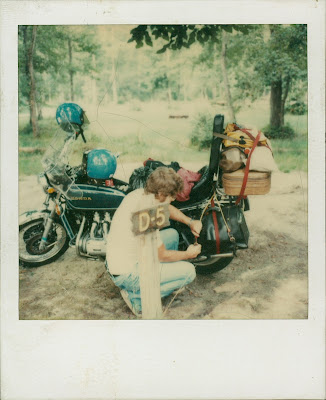 We had a ball, despite the August heat, we vowed to do it again someday.  Well someday turned into the very next summer.  Away we went, tent and all, no "Just Married" sign this time and visited Disney World again.  To keep cool as we rode, we'd pull into a gas station and hose ourselves down, clothes and all and let the airflow as we moved down the road become our poor man's "air conditioning". ;c)
Love was grand, but on the way home, we stopped  for lunch and there was a brand new Toyota Chinook mini motor home that we drooled over.  However, there wasn't money in the budget for an extravagance like that.  Hmm, maybe someday.
We decided that we'd make Disney an annual vaction spot for us, but then something happened...a baby girl arrived, all 9 pounds 15 ounces of her and our lives changed forever. :c)
I figured we'd still motorcycle on vacations and puchased a sidecar for the Goldwing.  Marti and baby Heather sat in the side car and on the motorcycle's back seat a new item appeared...a diaper bag.  We also had a dog by now, a Daschund, who rode happily in a little box I attached between the motorcycle and the sidecar.  He loved it, his ears flapping in the breeze.  Oh, and before I incur wrath, I had a tiny little helmet for the baby.
Then came baby Ryan, followed by baby Corey.  I ran out of room for sidecars and the motorcycle found a new home.
The Next Step.
We bought a tent.  Many young families have a tent.  This was a 10' x 10' Eureka nylon tent that could be set up in mere minutes.  It also got soaked if it rained... in mere minutes.  I found that a plastic drop cloth placed inside the tent instead of under it helped keep things relatively dry.  But despite my best efforts, we found ourselves too often with a river running through the tent, soaking us all.  We drooled over all the RV's we saw around the campgrounds, slightly envious of their dry interiors.
Then, without warning, my mom and dad bought a mini motorhome.  I remember my mom always liked the idea of some kind of camper.  I recall at the 1964-65 World's Fair in Queens, NY (when I was a mere whisp of a lad) where she saw some truck campers and dragged us inside a couple for a look.
We liked the mini and Marti and I kept on the lookout for something we could afford.  There were lots of options.  A truck camper was pretty economical but we thought that maybe the kids would strangle each other riding in a pickup truck all day.  So a pop-up seemed okay, too.  But I wasn't comfortable with the idea of anything canvas sided.  A travel trailer, same worries as a truck camper.  So when we stumbled on the Class A Travel Mate, it seemed like a no brainer.  There was room to spread out, the kids wouldn't get on each other's nerves and I would be able to arrive at our destinations with my mind intact. :c)
The biggest issue for us is we want to travel in our RV as often as we can with family.  We've got four grandkids now (two girls and two boys). 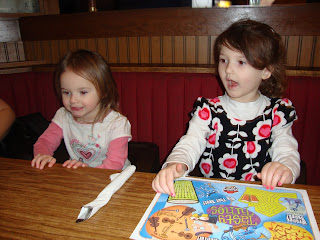 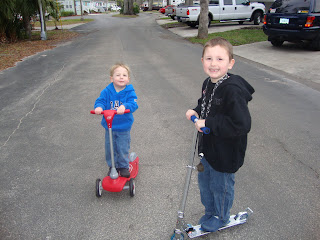 Along with their parents, we travel together in comfort and have enough sleeping capacity that everyone has their own bed and there is no rainfall soaking everything! 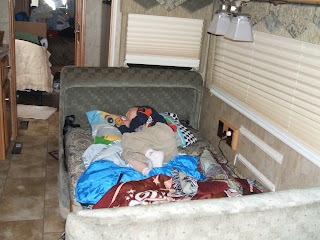 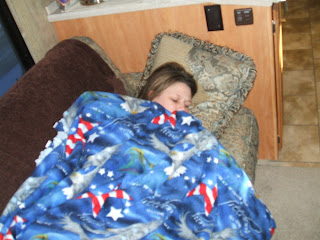 Our Winnebago has enough room for everyone to spread out and enjoy themselves.  Not as roomy as a house, but enough to have a ball on our vacation travels.  :c) 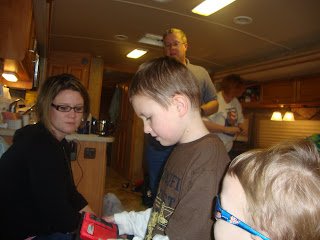 Posted by Paul and Marti Dahl at 4:49 PM