A Walk In The Park

With all the nonsense and aggravation of firing the old realtors, the fun and games of picking a new one and getting the house re-listed, we welcomed the chance for a weekend getaway to Bull Run Regional Park campground for the weekend.

I had a minor maintenance item to take care of on the Journey before I started the engine.  If you recall when we returned from our Branson trip, I found the lower radiator hose clamp was leaking antifreeze from the diesel engine's radiator.  I had picked up some heavy duty clamps and extra antifreeze to get everything squared away.

I unlocked the Journey's door and was greeted by a visitor. 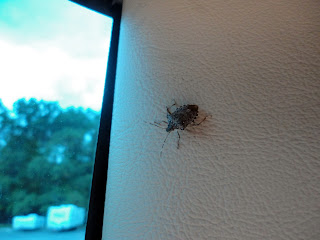 Yep, it's a Stink Bug.  I chased him out the door, hopefully he won't return with more friends.  Last year the Journey was infested with them, they decided they liked it as winter quarters.  We had quite a battle to eradicate them, but we won in the end.  I don't want to have to deal with that again.
I crawled under the rear of the Journey to deal with the errant hose clamp.  This is the damaged clamp that was leaking before I tightened it.  You can see it doesn't even line up straight.  I didn't want to chance it loosening up again, it was too worn to trust. 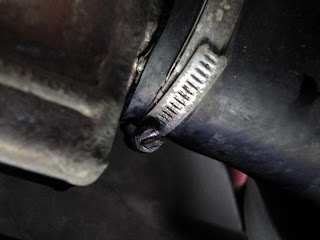 To remove and replace the clamp without causing another antifreeze leak, I opened up the new clamp, 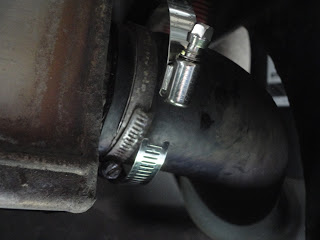 then put it around the hose, 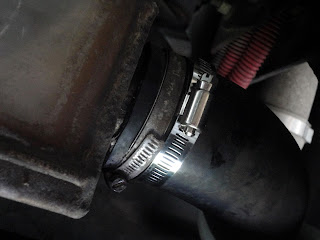 and snugged it lightly down next to the old clamp.  Then I removed the old clamp.  Finally I re-loosened the new clamp, repositioned it on the hose and tightened it down snug. 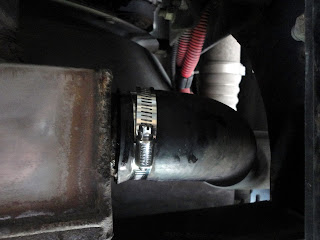 You can see the difference between the old clamp and the new $1.38 clamp.  You wonder why manufacturers scrimp on things like this. 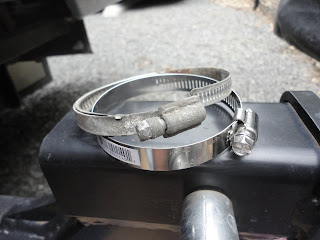 Next I had to replace the antifreeze that was lost when the clamp leaked.  I bought two gallons of antifreeze premixed 50 percent antifreeze/50 percent distilled water.  It is special antifreeze that contains additives that prevent corrosion inside the cooling jacket of diesel engines. 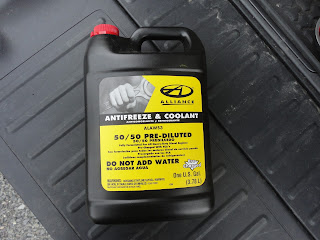 I opened the cap on the coolant recovery tank, 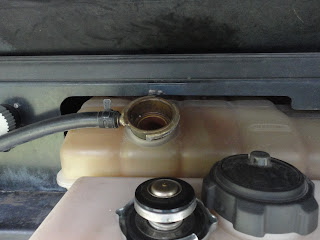 and poured in a gallon of the antifreeze right up to the full (cold) mark on the tank.  You can see the level is right to the tip of the arrow indicating where the level should be. 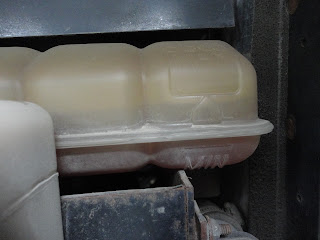 I'll have to take the Journey for a bit of a ride later this week to get the engine hot enough for the thermostats (yes, Cat diesels use two of them) to get the proper level.  The drive from the storage lot to the campground is about a mile and no way is that far enough to get the engine to operating temperature.
Marti mentioned the great time we had meeting Erin and Mui.  But besides visiting with them and going out to dinner, we did other things besides lay around, read and relax.  We even took some walks around the park.  On one of the jaunts, we saw something we've never seen before. 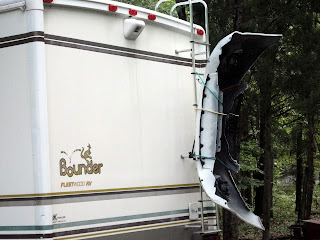 Strapped to this motorhome's ladder is a bumper.  It was from their tow car.  I think they had to remove it from their compact car that they towed on a dolly.  I don't think they could get it on the dolly without damaging it.  I guess you could call that thinking out-of-the-box.
Or maybe the owner is not the best driver and knocked the bumper off.  Why do I think this? 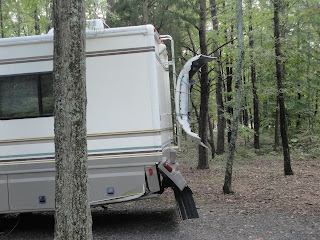 Yep, the dreaded tail swing reached out and met an immovable object.  Ouch! 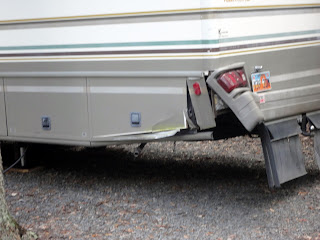 Just one more thing.  Is anyone having a problem posting comments on some blogs and not others?  I am, Blogger is being difficult again and checking into the  Blogger "Help" page shows that it has to do with people's security settings.  If you find your comments have fallen off lately or you haven't seen intelligent and witty comments (like mine) on your blog for a while, double check you security settings and see if they have somehow changed.
I have my security settings set to the lowest level, I welcome all comments, even ones that tell me to go take a flying leap off a cliff.  ;c)
Thanks for visiting and feel free to leave a comment.

Posted by Paul and Marti Dahl at 9:13 PM