Yesterday, I spent several hours at Camping World while the awning motor on our patio slide was replaced. 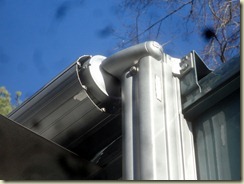 I was sitting in the lounge reading my Kindle when the service advisor came in.  He said the motor installation was completed but there was an issue that he needed to show me.  Uh oh.  I started to imagine more dollars flying out of my wallet. 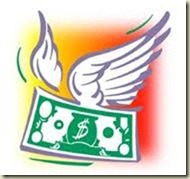 He and I walked down to the shop where the technician had the control box for the awning open and all kinds of wires were hanging out. 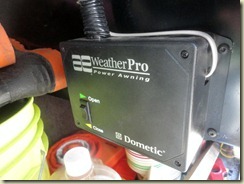 The tech said there was a bad circuit board and solenoid in the box and the only way he could get the awning to come out was to bypass a circuit.  However, the switch worked to pull the awning in.  Hmm.

The service advisor went to look to see if they had a new box in stock and returned several minutes later with an upgraded model, evidently my control box was obsolete and replaced by the new model.

Of course the new model was completely different and a major rewiring would need to be done.  Sort of a square peg in a round hole issue.  I was told that warranty companies don’t usually cover this kind of a repair, it is considered an upgrade and I’d probably have to pick up the labor at $119 an hour.  I could see several hours of work to do that.

I told them to stop right at this point.  I would put in a call to Lichtsinn Motors, a Winnebago dealer one mile from the Winnebago factory where I buy my parts from.  My thoughts were since Winnebago buys parts by the thousands, they may still be able to procure the exact model control box that I had.  I decided that if the box was not available, I’d wait for a later time when we’d go the the factory in Iowa and have them replace the box with the upgraded unit.

I paid my portion of the $650 bill, $286, that the warranty did not cover.  I had to pay a $100 deductible, the shipping and part of the labor.  The warranty company would only cover one hour and the job took almost two so I had to pick up the difference.  I’m okay with that.  I’ve already had more repairs covered than I paid for the extended warranty. :c)

I drove the Journey back to the campground and Marti helped me get back in our site.  I told her what went on and opened the basement compartment to show her where the awning control box is.  Upon opening the basement door I heard a little whistling sound coming from the control box.  Now I’m scratching my head.  What’s going on?

I took out a screwdriver and took the faceplate off the control box, intending on disconnecting power to stop the noise.  As I started to back out the screws I found a little switch on the backside of the control box, where it was not visible from the outside.  Sorry for the picture quality. 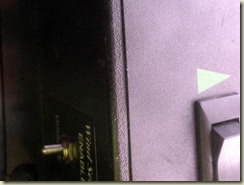 I wondered what the switch was for, so I toggled it and the whistling stopped.  It is for the automatic wind sensor mounted on the roof that is supposed to close an open awning if the wind picks up too much.  Just for grins and giggles, I pressed the awning control switch and out came the awning.  Then I put it in, and out and it several more times.  It worked properly.  I’ll have to look up the switch in the owners manual to see all about it.  I’m glad it works properly now.  I learn something new all the time, and this was a free lesson.

Next time I’m in Camping World, I’ll have to tell the service advisor about what I found out.  In fairness to them, they work on all kinds of RVs and accessories and being able to know everything about all that would be almost humanly impossible.

Now about fishing for bacon.  Marti cooked up some turkey bacon and eggs for breakfast.  As she was putting the bacon on a plate from the pan, one piece jumped out and fell down in the tiny space alongside the stove. 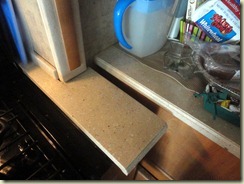 Can you see it hiding down there? 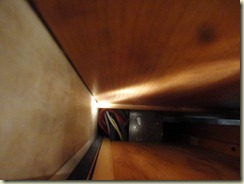 I dragged up my handy reaching tool and awning rod and went fishing. 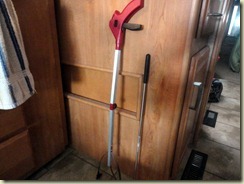 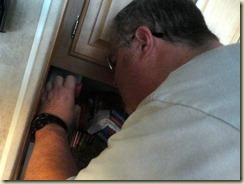 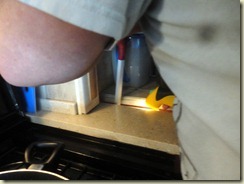 Of course the bacon didn’t want to come out and broke into two pieces, making it a bigger challenge.  I don’t give up easy and won the battle (eventually). 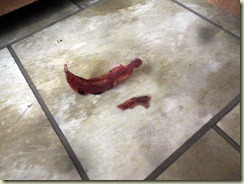 At least I had a tasty snack to celebrate my catch (not!).

Today is a special day, it is my bonnie bride, Marti’s 29th birthday (again).  Funny how those birthdays sneak up on you.  ;c)