Yep.  We feel old, really old.  Today is our grandson, Andrew’s ninth birthday.  Seems like just the other day we rushed down from our Virginia home to Charleston, South Carolina, where he was born.
I remember holding his tiny body in one hand.  Can’t do that anymore, he’d break my arm.

Andrew received some nice birthday gifts, including a new Skylanders figure.  What is that?  I didn’t know either until he gave me the low down. 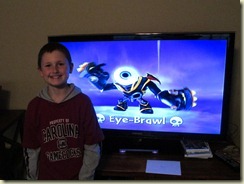 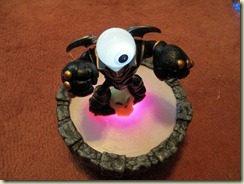 Skylanders are a new kind of video game where you get these funny looking characters, place them on a little pedestal and the character comes to life in a video game on your TV via a wireless hookup.  There are a bunch of different characters, each with its own personality and powers that go on adventures in the game.  Two players can play at the same time using separate characters.

The boys have accrued quite a collection, between Christmas, birthdays and saving up their allowances.  Technology is amazing. 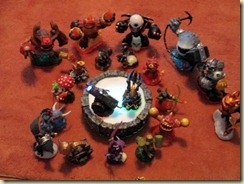 `
Of course, I bought him an old school present.  A model of a V-8 car engine that we’re going to build together.  About time I started teaching him some basic mechanics.  ;c) 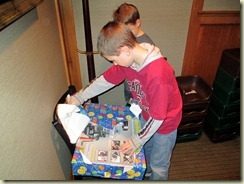 Owie had to help Andrew try out some new Star Wars Light Sabers. 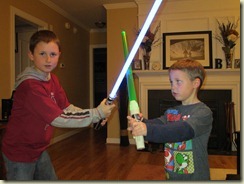 Andrew requested we go to his (our) favorite Japanese restaurant for for his birthday dinner.  The restaurant has a tradition for birthday visitors, you get to rub Buddha's belly, make a wish and then hit the gong.  Andrew hit the gong like he was trying to hit a home run.  :cO 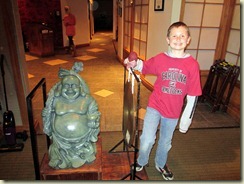 We had a great meal, the chef scared Marti with a big fire. 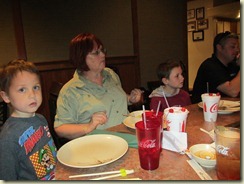 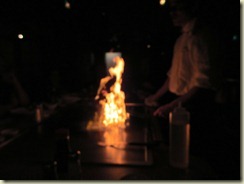 Mimi Marti enjoyed a good time with her grandsons. 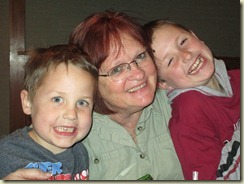 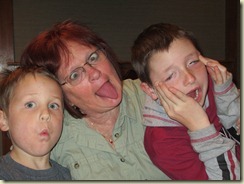 The chef was amazing, not only was he a fantastic cook, he had a great sense of humor.  He opened up and told us a little about himself.  He wasn’t born in the United States, he came from another country, (not Japan).  As he cooked, his hands were a blur.  I found that interesting that he could whip the utensils and food around, but said he was glad to get the job here.  He previously tried to be a hamburger cook at Five Guys, but they turned him down.

He looked familiar to me but I just couldn’t place where I knew him from.  It was very strange.  Maybe it’ll come to me? 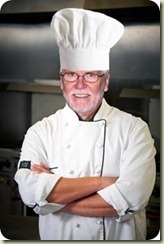 Posted by Paul and Marti Dahl at 9:02 PM