Rick To The Rescue

I really like computers.  They are so handy for email, bill paying and keeping in touch with friends and family.  The Internet is a wondrous thing that you can access with your computer.  I’ve traveled the world and found all kinds of interesting things to learn about without leaving the comfort of my RV couch.  It makes you wonder how we ever lived before computers.

Computers, however, don’t like me.  At all.  In fact they go out of their way to make me cRaZy.  Seems like when I try to do even a simple thing, it turns into a gut twisting, nail biting ordeal.  I sometimes think that I have some kind of aura about me that makes computers so uncooperative.  I used to drive my IT guy up the wall at work, he swore I could wipe a hard drive simply by walking by the server.

I’m pretty happy with Google’s Blogger program.  After first being introduced to it several years back by the Geeks on Tour, I began using it to document our RV lifestyle, as well as learn about other RV folks out there traveling around.  Over the years, I became friends with many other bloggers, and have met many of them in person on the road.

Then in comes the “fun”.  Google introduces Google+.  The new program that in a way competes with FaceBook as a social site.  No big problem for me, I didn’t see the need to join.  Until other folks joined Google+ and I found I was unable to leave comments on their blogs.

I finally broke down and decided that I had to join Google+ and modernize.  Except that Google+ didn’t want to join with me.

I spent several hours trying to join, getting all kinds of error messages and notices that I violated Google’s polices on this and that.

It became an arm twisting, body slamming ordeal.  All of that done to me, by my computer. 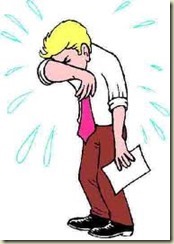 Finally, when I exhausted everything in my (very limited) bag of tricks, I reached out for the Shaman of Google, none other than that wonderful guy, Rick Doyle.

Rick looked into my dilemma, noted a problem and tried to direct me into a resolution.  I still couldn’t get things right.  Is that a surprise?

Rick saved the day, though.  He sent me a program to download so he could access my computer and set up Google+ for me.  After a couple of false starts, he logged on to my computer and in no time had me as the newest member of Google+.  He even opened up a virtual chat window, called a “Google Hangout” and we talked face-to-face live and in person while living on opposite sides of the North American continent.

I have to give Rick a hearty THANK YOU!  He’s a great guy and it was very nice of him to spend some time helping me out.  It takes a special person with all kinds of patience to help me through computer issues.

There are many great people in this world and Rick is one that occupies a position on the top of the heap.

Plus his beard looks pretty good live and in person.  ;c)

Posted by Paul and Marti Dahl at 4:02 PM