I thought I thought ahead, but I didn’t quite plan for a sneak attack by my nemesis, Murphy.  Before we left the campground at the Navy base and headed for a prolonged stay in my dad’s driveway, I dumped my holding tanks and gave the black tank a serious flushing with the flush connection on the Journey.

After pulling in the driveway successfully and plugging into the electricity, I figured there was nothing to worry about. 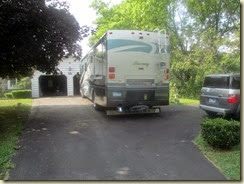 As usual, I was wrong.  I wasn’t watching out properly and Murphy attacked.

Marti and I are spending time helping my dad recuperate from the infection he got in his elbow that wound him up in the hospital.  All is going well, Marti is nursing him while I’ve been doing odd jobs around the house…yes even painting.  We take him to doctor appointments and numerous chores around town because he’s not allowed to drive (doctor’s orders) for a while because of the meds he’s on.

At night we retire to our own bed in the Journey, it’s nice to have the bed and our bathroom to use at night.  We do use his shower in the house to prevent the gray tank from filling up.

Sitting out under his maple tree (to the left in the above picture) after the chores of the day, I noticed a little drip starting from the wet bay.  At first I didn’t think anything of it, but I decided to take a look.

Good thing I did, because it was a black tank leak, just starting.  It wasn’t leaking at the tank, it was the black tank valve that was leaking, even though it was closed all the way.  It shouldn’t have been too much of a problem, but the end cap I have on the sewer hose connection seemed to be leaking, too.  Ugh!  Not fun stuff.

I figured the black tank valve had given up the ghost.  Prepared as I like to be, I already have a new black and gray tank valve in my spare parts box.  The job to change them out isn’t too bad, but you certainly want to have well flushed empty tanks before you disassemble the sewer system.

Therein lies the problem, no place in the driveway to dump and flush the tanks.  Magnifying the issue, there is no handy RV park nearby and I really don’t want to drive out and in the driveway again if I don’t have to.

I drained the little black tank liquid (very carefully) into a can and removed the sewer end cap.  A quick look revealed why it was dripping.  The gasket, after years of being twisted on and off had become distorted and no longer sealed. 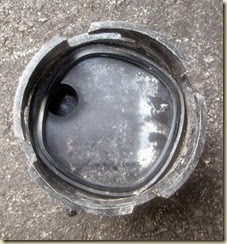 The gasket is no longer round, it’s now sort of rectangular.  No wonder it leaked.  I had to find a temporary fix, so I Googled for nearby campgrounds and found one relatively close by.  Off I went and they did have a new end cap in their store, which I bought. 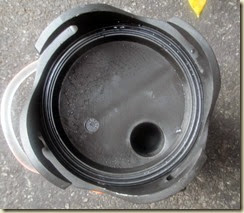 It stopped the drip, but I wasn’t thrilled with that being my only defense against a potential black tank disaster.  I needed to come up with a more solid, if temporary fix.  Amazon to the rescue.

I ordered a Valterra Twist On Waste Valve.

It was one of those items I’ve looked at before, thinking it might be handy to have one someday, just in case.  Well, the just in case was here and I sucked up the extra $10 to have it delivered in two days.

It was here this afternoon, I quickly put it on and even though it is a temporary fix, I don’t have to worry about having a new black tank disaster story until I have a good place to flush the tanks and replace the valves.

It just twists on to the sewer connection and keeps the drips in place. 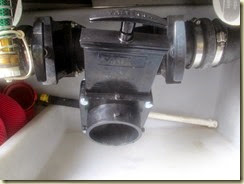 The new end cap will fit right on the open end.  A temporary fix, but a very solid one.

As an added benefit, for extended boondocking trips, using the twist on valve, I can keep it closed, open both the black and gray tank valves and increase my tank capacity, because the liquids will seek their own levels and they will fill both tanks evenly, instead of having an overflowing gray tank and a hardly full black tank.

Mixing the liquids in both tanks won’t hurt anything, so it’s a win-win all the way around.

Posted by Paul and Marti Dahl at 9:27 PM