Not So Youthful Youth Group

During our New Jersey stay, it hasn’t been all about granddaughters and house rehab.  We’ve had a laundry list of friends that we’ve been able to visit, too, since we are originally from this area.

One reunion we went to was at a church we used to attend when we were first married. 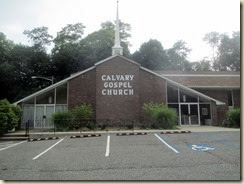 Marti an I ran a youth group there for a number of years before my Coast Guard career took us away.  Over the years, many of the kids stayed in touch with us and a reunion was set up with some of the kids who stayed in or near the area for a lunchtime get together.

We had to get a group picture of the gang.  Of course, Marti and Linda, in the front row, had to revert to their younger antics…

The real shocker for us was that not only some of the kids were now parents, even a few were grandparents!

That almost made us feel really old until I realized that though I’m starting to get a little gray hair, unlike some of the guys, at least I have it all!  :c)

To top it off, one of the “kids” in the group is now the pastor of the church.  Pastor Lou and his wife Patty are carrying on the work of the church. 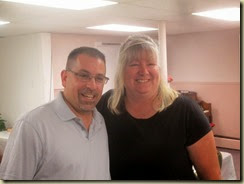 The good thing about the Not So Youthful Youth Group was that we are all so old that there was no running around playing games, we rather enjoyed sitting around reminiscing about the Good Old Days.

If we had gone back and attempted some of the games we used to play, someone might have broken a hip!  :cD

Posted by Paul and Marti Dahl at 3:35 PM