There were a lot of hard goodbyes this week.  We said so long to little Elizabeth and big sis Anabelle.  Hopefully we’ll get back to see  them in early December. 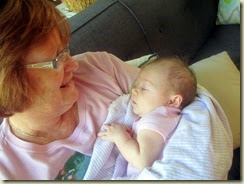 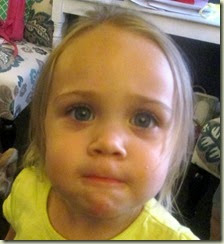 “You better come back soon, Mimi and Pa!”

We left my dad’s house in NJ, it was hard, he appreciated our help over the last several weeks as he recovered from the strange infection that laid him low.  He lives alone and will miss our company.  By 10 am, we were rolling, I successfully backed out of his long driveway and didn’t cause any damage to his lawn.

We headed West, we plan on being at our son Ryan’s home about an hour West of St. Louis by Saturday.  With a tank full of fresh diesel ($3.54/gallon!) and a warm sunny day, we hit I-80.

We worked our way to I-78 to the PA Turnpike, then on to I-70.  One thing we love about having a Class A motorhome is the ability to use the bathroom on the road…the passengers, not the driver.

Marti came back from the bathroom and told me there was some kind of white powder all over the kitchen counter.  That was really strange. 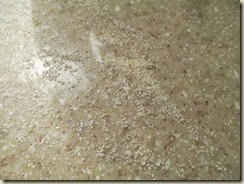 At a rest stop, I looked at the powder.  It looked like little Styrofoam beads.  There was only one place they could have come from and if they were Styrofoam, it could indicate a real problem. 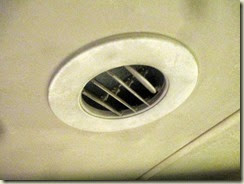 The ceiling has Styrofoam in it, with the a/c vents cut into them.  The only way I could figure that the Styrofoam had broken down into powder was some outside influence.  One such influence came to mind:  Mice!

I decided to keep that thought to myself until I could confirm it.  Marti is not too fond of those little creatures.

A little later, Marti found the source of the powder.  Not mouse caused Styrofoam bits, but something even more sinister.

Grits.  (Also known as wallpaper paste to us Northerners.  For some reason, Marti likes them.). 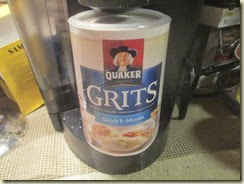 The grits container in the cabinet over the counter fell over and the top came off. 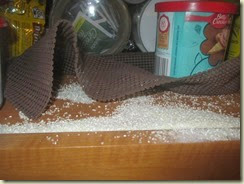 As we drove down the highways, bumps bounced the loose grits down on the counter from the cabinet.  Phew!  I had thoughts of a serious battle with mice, instead I quickly fixed the problem with my vacuum cleaner.  Marti ensured this will never happen again. 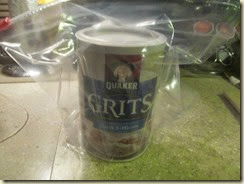 Tonight, after a short 433 mile drive (PDD Silver Level), we’re overnighting at a Cracker Barrel. We had dinner and are looking forward to breakfast before we hit the road.