Baptism And A Birthday

My shoes squished as I walked.  But this time, it’s not what you think, unlike that other time.

I bought a really nice, low mileage second hand motorcycle that my son Corey told me about, it was turned in at his car dealership as a down payment on a new car.  After Corey had carefully checked it out and gave me two thumbs up, I made the deal long distance. 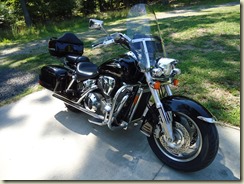 It’s a 2003 Honda VTX 1800R, a really (really) big bike.  I’ve been riding motorcycles for years and have put many a happy mile on them, including a honeymoon trip to Disney World with my long suffering bonnie bride, Marti.

When we arrived in NJ and got all set up at the Navy campground, we headed over to see Corey, Amanda and our two Jersey granddaughters, Anabelle and Lizzie (Elizabeth).  After the initial visiting died down, Corey showed me the motorcycle that he had been keeping in his garage for me. 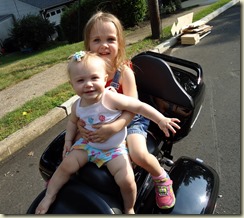 I didn’t know how old the tires were, so to be on the safe side, I had ordered two new ones to put on.  I’ve plans to do a four day ride on the motorcycle with two of my brothers next week up through the NY State Adirondacks, they both have big Harleys.

Not having the facilities to change out the tires (good thing I planned on it, the date codes showed the old tires were made in 2005) I drove my car over to the nearest Honda motorcycle shop, about 15 miles from Corey’s house.  The service manager said he could change the tires for me, to bring the bike right in.  He’d try and get it done by Friday, Saturday at the latest.  Good thing because my trip with my brothers starts Sunday.

Now the fun part.  It had been raining on and off all day.  Sometimes little drizzles, other times the proverbial cats-n-dogs.  I watched and watched, both the skies and the clock.  Finally, I saw the rain stop for a bit, but the skies still looked ominous.  I decided to chance it, I had to get the bike in the shop.

I pulled on my new bight yellow rain suit and rain boots, donned my helmet and set out for the very first ride on my motorcycle.  Marti followed me in the car for a ride home.

Of course, with my luck, the rain started in while I was about half way there.  I thought to myself, this ride is a Baptism by sprinkling.

By the time I was within a half mile of the shop, the heavens opened and my ride was now a Baptism by total immersion.

I looked like a day glow yellow blob as I sloshed my way into the service manager’s office.  I left quite a puddle on his floor.  Despite the rain gear, I was pretty wet inside and out, no rain gear will keep you totally dry and lots of water had found it’s way down into my shoes.  They squished when I walked, but at least this time it was clean water.

Now how does this adventure end, you ask?  If you guessed clear sunny skies by the time I got home, you’d be correct.  I guess I have to work on my timing.

No matter, we’re here and Lizzie has just turned 1.  We had a party for her, right down to the ice cream cake adorned with a #1 candle. 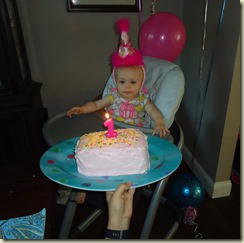 She thoroughly enjoyed her cake. 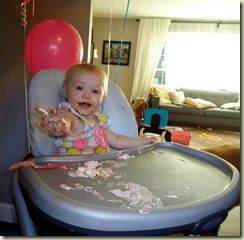 How does one clean a one year old after enjoying making a mess of her cake as she ate it? 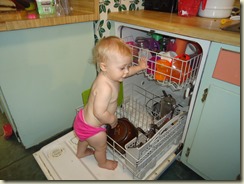 Posted by Paul and Marti Dahl at 6:53 PM