Now, the “dark side”.  The ten things that I’m not so fond of.  Some of them can’t be helped, or maybe I’m too picky.  Other things you just have to shake your head about the manufacturers and ask, “What were they thinking?”

Then sometimes, I have to admit that there is credible evidence that there are no women on the design teams.

So, in descending order, from the least to the most “Un-fond” items on the Journey: 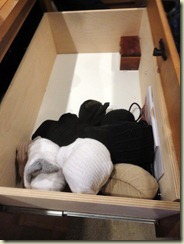 When we were shopping, one item was to get as many drawers in the motorhome as possible.  The Journey had a nice dresser with six drawers.  Using them became an adventure in itself.  The drawers are narrow and shallow, necessitating creative stowing of clothes, mostly by rolling them up.  Not the end of the world, but definitely something a woman designer would not have allowed. 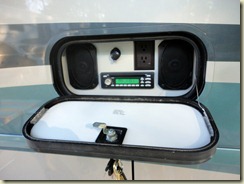 It was on the Journey when we bought it, something we hardly ever use, maybe twice in five years.  A CD/Radio with large speakers, just enough to ruin the beautiful sounds of nature or annoy your next door neighbor.  I would not have ordered this item. 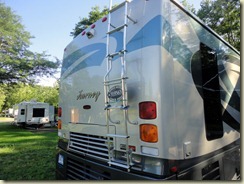 I’ve heard the argument that this design is to keep kids from climbing on your roof.  It seems this is found mostly on diesel pusher motorhomes, but not on gas units or trailers.  It begs the question, “What is more attractive on diesel pusher roofs than gas motorhomes and trailers?”

This may be Winnebago specific, they use an aircraft adhesive glue to attach the front hood and rear engine hatch to their frames.  I’d hate to fly in a plane that uses this adhesive, because it wouldn’t be long before you’d watch your wings flutter away. 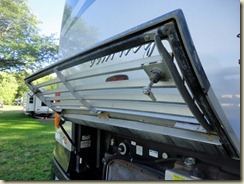 I’ve had to reattach both the hood and the rear engine hatch with a strong, heavy duty epoxy.  Since I’ve done this, they have stayed in place rock solid. 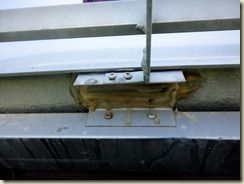 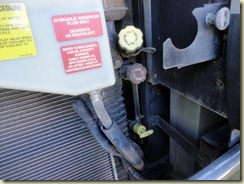 This is common on diesel pushers with Cat engines, the dip stick is about four feet long.  When checking the oil, the dipstick slides in fine until the last 3 or 4 inches, then it is a real fight to get it seated.  I have to twist and turn the dip stick while trying to lightly push it all the way in.  Eventually it goes in after a couple of minutes of battle.  This is just an example of a poor design and lousy quality control. 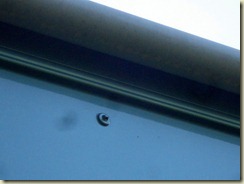 Another “What were they thinking?” item, only found on Winnebagos.  The large slides on the Journey have locks that secure them when traveling.  In a moment of less than brilliance, Winnebago engineers designed a locking mechanism that extends through the top of the slide.  Then they had to create a drain system to remove water that can collect in the lock mechanism, so they put these tiny, quarter size drain holes near the top of the slide.  The holes are so small they get easily plugged up with dust and if not cleaned out with a toothpick or pipe cleaner on a regular basis, will allow water to drip down inside the motorhome. 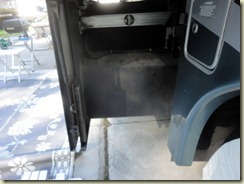 And again, “What were they thinking?”  Winnebago engineers designed the basement storage compartments to come out attached to the slides.  I guess the idea was to enable easier access to the compartments by not having to crawl under an open slide.  Unfortunately this leads to no pass through basement compartments, limits the weight (300 lbs.) that can be put in these storage bins and makes them unable to accept large items like a lounge chairs.  Winnebago touted them as “Store More”.  I think they should be called “Store Less”. New model Winnebagos have gone back to the better pass through storage compartments. (Bummer!) 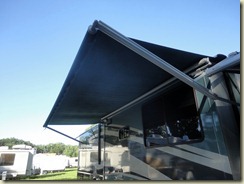 I suppose it is nice to be able to push a button to open and close your patio awning.  On my Journey, the awning is placed over the top of the passenger slide and is positioned to come straight out to miss the slide.  I cannot adjust it and it provides very little shade.  It is supposed to do two things automatically, close if the wind gets too strong and self dip down to shed water.

The wind sensor on top of the Journey has been looked at again and again while under warranty and never was able to work.  I finally gave up on it and ensure that the awning is closed if it gets too windy.

The back end of the slide is grooved to dip down and shed water if it collects too much in a rain storm. 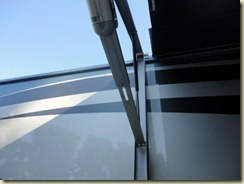 The owner’s manual gives a big caveat that it is only for light rain.  I’ve read of many people having their awnings collapse and break, causing costly repairs when this shedding system failed.

I go by the rule that if I’m not sitting under my awning, it gets closed.

The door awning is another engineering “mis-marvel”.  It is a manual awning, cranked open with a hand crank rod (you can see the rod on the left side of the awning). 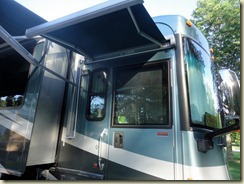 The “beauty” of this is when it starts raining, as you crank the  awning closed, the rain water runs off right on to your head.  Pass the shampoo!

In the main living room, there are rows of vents in the ceiling which provide cool air to the space.  There are ten of them and the work very well. 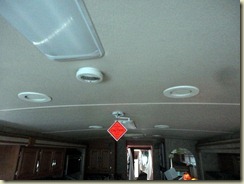 In the back bedroom, which is just about half the size of the living room, there are only two!  This makes for a stuffy bedroom, even if we shut all the living room vents, forcing the cool air to exit these vents, it is not the best solution.  We have to augment the air circulation with a portable fan. 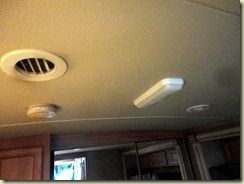 No picture here, everyone knows what a mattress looks like.  The mattress in our Journey is my biggest pet peeve.  We don’t like it at all, it is without a doubt the most uncomfortable mattress I’ve ever slept on, even all the cheesy ones on Coast Guard cutters.  We put an expensive mattress topper on it to try and make it better, but no luck.  The mattress has a “gully” in the middle, between the two adjustable air chambers.  You are rolling into that gully all night.  Plus if one person gets up the other’s side sinks down, or when a person gets in, it bounces the person already in bed.

I found out there are various levels of quality in these mattresses, from cheap ones to very expensive ones.  You guessed right, the cheapest version is what was installed in the Journey.

I’ve researched the mattress and found it comes with a 20 year warranty and have sent them an email to see what, if anything can be done to rectify the lousy performance of this much touted wonderful mattress.  If we get no satisfaction from them, we’ll replace this junker with a real, conventional mattress.

So there you have it, our good and bad items that we’ve found in out five years with our Journey.  Are any of these make or break items on a new motorhome?  No, but I’d certainly shy away from a motorhome with the storage compartments we have and would make a deal to remove an air mattress and replace it with a good, conventional mattress.

Hopefully, maybe these two posts will help a new RV buyer be a little more informed about what to look for.

The bottom line question:  Would we buy the Journey again just the way it is?  The answer is a resounding YES!  It has so many good points, the negatives are just minor issues that we’ve learned to deal with or work around.

Posted by Paul and Marti Dahl at 2:23 PM