What Is Your Opinion?

I’m not going to start a debate on overnighting at a Walmart, Flying J or other parking lots where RVers are welcome.  Instead, I wonder what you think about the Parking Etiquette Letter that is found in each issue of the Escapees magazine. 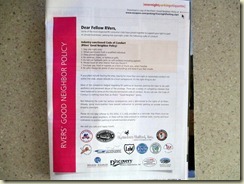 I understand the idea behind the letter, to educate RVers that are doing things in these free parking areas in poor taste that potentially could result in RVs no longer being welcome.  A few ruining a good thing for everyone.

Things such as staying for many days, parking in areas that are too close to the store entrances blocking customers, taking up way too many spaces, or the famous allegations that you read about in some RV forums, like setting up barbecues, and dumping tanks on the pavement.  I’ve never seen anyone set up a barbecue, chairs or dump their tanks, I think the tank dumping is an urban legend (with the exception of the Dave Matthews Band tour bus dumping its tanks off a bridge, which was well publicized and which they received a huge fine for).

If you are far away from store entrances in the corner of the parking lot, what does it matter if you put out a slide?  I conducted a non scientific poll once, in four Walmarts that I overnighted at, when I asked for permission, I asked if they would mind if I extended my slides.  Three of the four managers had no idea what a slide was, the fourth said no problem.

Common sense rules, I treat the privilege of staying overnight as I’m guest.  Sometimes I’ll pick up some trash on my way into the store, or move some shopping carts from outlying areas of the lot to the cart corrals.  I also spend money in the store (often way more than the cost of a campsite!).

What I’m not going to do is print out the Parking Etiquette letter and go around sticking it on RV’s windshields if I see their slide out, or if they’re parked wrong, or whatever.  I’m not the parking police, I’m not going to tell somebody else what they should or shouldn’t be doing.  That’s a good way to hear some unpleasant words at the least, or earn a black eye or more from someone that doesn’t appreciate my attempts to “educate” them.

What do you think?  Should we go around and place this letter on RV’s windshields?  Isn’t overnight parking something better discussed around the campfire or on an RV forum?  Sure there’ll always be that one person that pushes the envelope of good taste, but that is something the store manager should handle.