After all the work on the generator, here are a few pictures of the belt.  It’s not a “fan” belt like I previously called it, it actually is the belt that drives the water pump. 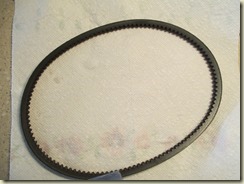 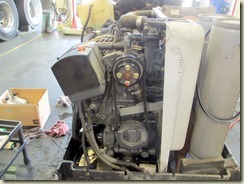 It is hard to see but if you look closely, you can see the shiny glaze on the sides of the belt.  Normal wear patterns along the top edge where you can see some of the cords that are in the belt. 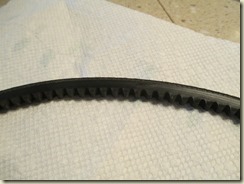 Turning the belt inside out to look between the serrated teeth, there were no signs of any cracking or dry rot. 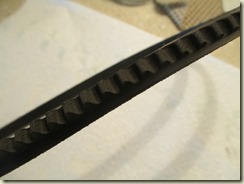 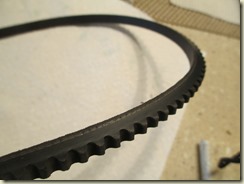 The bottom line?  I feel the Onan maintenance requirement to replace the belt at 1000 hours is too low.  I think maybe they take into consideration that many RV generators sit more than they are used and over a period of time the rubber in the belt may dry rot.  Because we are heavy generator users, the belt didn’t get a chance to dry rot.  I feel I could have easily done well to leave the belt in place for up to 2500 hours.

The only thing of concern after looking closely at the belt was the glazing on the sides that was starting.  If left in place too much longer, the belt could have started slipping and cause overheating of the engine which would have been tough to troubleshoot with the generator in the chassis.

The belt change was part of my preventive maintenance program, to replace components before they fail.  Better to have things replaced when it is convenient for you instead of out on the road somewhere in the middle of a hot summer.

Total cost for the work?  I had the belt replaced as well as the fuel filter, the air filter, the oil filter and oil, plus the cooling system flushed and new coolant put in and all new mounting bolts installed.  $1009 before tax.

The technician spent over 13 hours removing the generator, taking the unit apart doing the service work, reassembling the generator and reinstalling it in  Journey.  During the work, at times, other techs leant a hand on the removal and reinstallation, so there were even more man hours of labor involved that I was not charged for.  I budgeted for the work and it came in quite a bit under what I thought it would cost.

So, I’m happy with it and have peace of mind.

Just a note, my generator is an 8KW Quiet Diesel unit, which is water cooled.  Most gasoline powered RVs use smaller generators, which are air cooled and do not have any belts and such that need replacing.