It only took us ten years to return to Key West from our last visit.  We’ve vowed not to wait that long for our next visit, we’re already talking about next winter.

We had a good time, strangely our visit became more of a social experience, meeting up with blog friends, new friends, and of course our niece and our long lost “daughter”.

We did get into downtown Key West on a number of occasions, I really enjoyed looking at the treasure at Mel Fisher's store.  I tried to convince Marti that a Spanish Piece Of Eight coin would make a wonderful item to hang on a necklace, but the several thousand dollar cost made her nix that idea.

Mallory Square at sundown was really interesting, seeing some of the street performers.  Some were interesting, like this girl who twirled flaming hula hoops while wearing a bikini (how does one embark on such a career?). 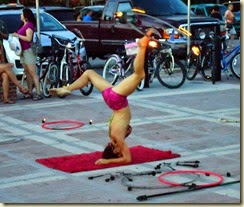 Most of the performers (and for some I use that term very loosely) forbid you from taking any pictures.  Then they wanted to sell you their own DVD.  Um, no thanks, your show wasn’t that good in the first place…but here’s a dollar, go buy yourself some soap and take a bath.

One guy our niece, Emily wanted to see.  The “Cat Man”.  My opinion of him was somewhere a mental institution is missing a resident.  All he did was chase around his cats, who for the most part didn’t want anything to do with him instead of perform.

But, it’s all part of Key West’s charm and was worth checking out.  I really got a kick out of some of the vehicles that reside in Key West.  This one apparently is parked under a coconut palm on a regular basis. 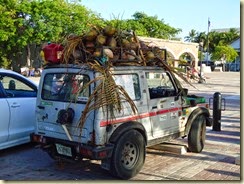 We met Emily and her boyfriend Brandon and had dinner with them up on Stock Island. 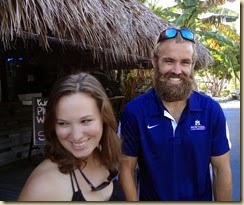 Marti has a severe sea food allergy, so she had fried chicken instead of the fried Hogfish and Grouper the rest of us had.  Big mistake.  Evidently they fried the chicken in the same oil as the fish and she paid for it.  I was worried that I was going to have to take her to the emergency room, but after a bad night, she bounced back.  Next time, she said she’ll stick to salads.

We laughed over the way they forecast the weather on Stock Island: 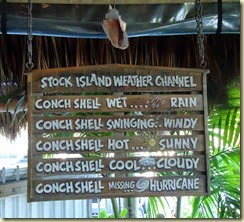 We spent some pleasurable time with our other “daughter”, Jen.  She grew up with our daughter Heather, and they were joined at the hip until they both went off to college.  Jen married a Coastie, who was stationed in Key West and had just retired.  They are moving back to New Jersey and Jen’s husband had already left to job hunt while Jen remained behind to finish out her school year teaching job.

We  sat each evening and ensured the sun went down while catching up on each other’s lives and families.  The last night I tried and tried and tried to get a picture of Jen and Marti, but Marti kept closing her eyes.  It became hilarious, so this is the best I could get out of about ten tries. 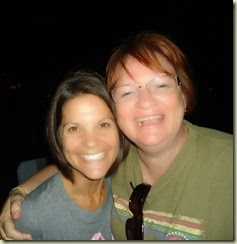 We rolled out at 9:30 this morning and headed back up the long bridges towards the mainland, enjoying the beautiful blue waters. 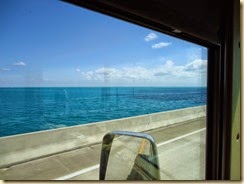 So unlike us, we only traveled 235 miles and we stopped for the next two days at the Naples RV Resort, where we stayed on the way down.  We actually arrived at 2:30, too.

Posted by Paul and Marti Dahl at 8:11 PM