Remember the Disney movie with the submarine Nautilus?

Visiting the Coast Guard Museum overlooking the Thames River in New London, CT, I saw this amazing sight transiting up to its home port at the Groton Navy Sub Base. 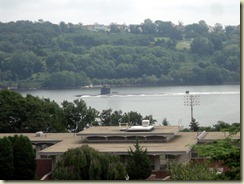 Being that I love “two-fers” I drove over to the Navy Base just across the river to take in another (free) museum, the Navy Submarine Museum.

The museum has many interesting exhibits, starting with the very first submarine, Turtle. This is a full size model that was used in the Revolutionary War.  It was human powered by a man named Ezra Lee who tried to attack a British ship anchored in New York Harbor.  An auger drill bit was attached to the top and with Lee inside tried to drill a hole in the ship’s hull and attach a bomb.  After paddling the sub by hand through the currents he actually got under the British warship only to be thwarted by copper sheeting on the hull that he couldn’t drill through. 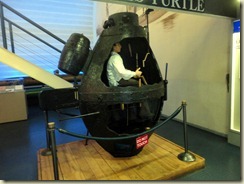 From the Turtle, tied up outside is the first nuclear powered submarine, the USS Nautilus.  It first sailed in 1955 and had an historic career.  Now retired, she is open for self guided tours inside. 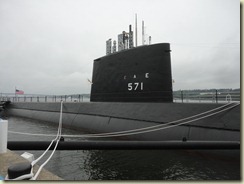 The hull has been modified to have a ladder down into the forward torpedo room. 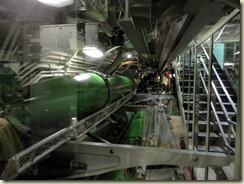 Even though the Nautilus is much bigger than the Turtle, it still has many tight spaces, including several water tight doors that you have to carefully step through.  Wonder why they call them “Head Knockers”? 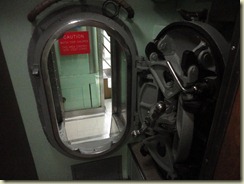 Even in a submarine, there are still traditions that are kept, like the Wardroom, where the sub’s officers formally dine on fine china. 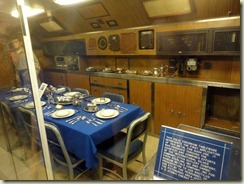 The sub has its own silverware service, embossed with the sub’s name. 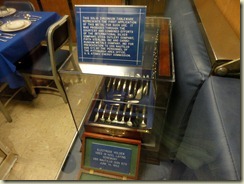 In the conning tower are located the periscopes where the sub is navigated from.  In subs, every system has a backup, just in case the normally used system fails. 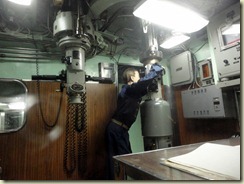 Despite all the fancy electronic navigational equipment, there are a couple of sextants, to find the sub’s position by looking at the sun and stars. 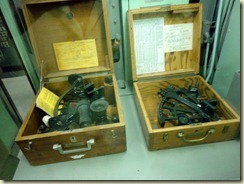 The cooks did a great job feeding the crew around the clock from this small galley.  Slightly larger than our Journey’s, but not by much. 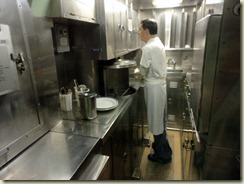 The crew’s mess deck did double duty.  Here are a couple of mannequins dressed out in emergency breathing apparatus.  Besides meals, training was often done here in this compartment. 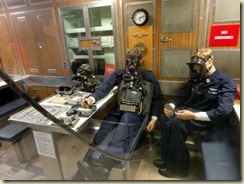 Submarine sailors don’t have the luxury of much personal space.  A rack (bed) lifts up to provide the storage for each sailor. 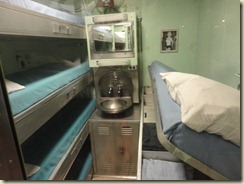 While we were there, another submarine sailed past in the pouring rain, heading out to sea.  Some of the crew stood on the deck rending honors. 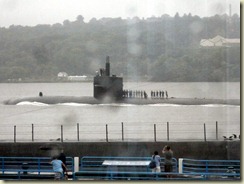 Escorting the sub to ensure it made it safely down the river and out to sea were two Coast Guard boats.  Have to look out for our Navy brothers. ;c) 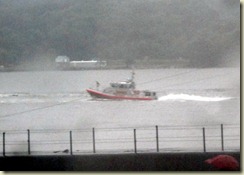 We made a “clean sweep” of the museum and its exhibits. 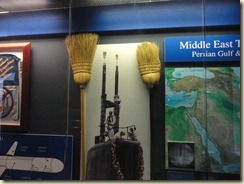 We pulled chocks on the Journey yesterday and left Rhode Island and headed down to New Jersey to the FamCamp at Naval Weapons Station Earle.  We visited yesterday with little Anabelle and today with Taylor, Kierra and Rebekah.  It’s nice to see them again.  Yes, I’ll post some pictures in an upcoming post.