We like to stay connected, that being said, we’ve become Internet Junkies…how did we ever live before Al Gore stepped up and invented this wonderful resource?  ;c)

For years we had a Sprint air card, it worked wonderfully, but had one drawback, it could only work on one computer at a time.  So we adapted and bought a Cradlepoint router.  It worked pretty well, but with the advancing technology and the introduction of the MiFi, we decided to upgrade.

We cancelled the Sprint air card (in retrospect, a big mistake because it had unlimited Internet usage).  But we soldiered on because we wanted the latest technology and with a MiFi, we could move about with the unit in a pocket and still get on line. 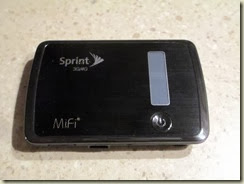 That was the theory anyway.  We signed up for a two year contract, spent $99 to buy the Sprint Mifi , signing up for 12GB/month at $87.95/month and went on our merry way.  Except this Mifi was anything but merry.

First off, Sprint has a very limited coverage area.  Even in some cities, we could not get online, or if we did, it was S-L-O-W.  Sprint boasted about its lightening fast 4G speeds.  We never experienced that, every time the MiFi went into the 4G mode, it locked up.

We spent many hours on  the phone with their technical support trying to get the unit to work.  Sometimes the technical support people were able to reset the device, sometimes we had to track down a Sprint store and get it reset by a technician.

We were very displeased with the Sprint MiFi and decided when the contract was up in March 2014, we’d look into another unit with a different company.  We couldn’t drop the contract or we’d have to pay up to a $350 early termination fee, which decreased by $10 every month.

Since we have been at the COE Volunteer Village, they provide an excellent WiFi that we use, so I was able to drop the Sprint plan down to 3GB/$35/month and just run out the contract.

Enter my eye problem.  We were at the Shaw AFB FamCamp while I recovered from my eye surgery, where there was no good Internet access.  We were glad to have the Sprint MiFi.

Of course, enter Murphy.  The Sprint MiFi stopped working.  Marti spent a couple of hours on the phone again with Sprint technical support.  The result?  The MiFi had burned out.  Terminal. Dead. 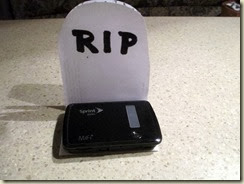 We went to the nearby Sprint store and decided to buy a replacement MiFi to use until the contract ran out.  First the store folks wanted to have their technician examine the MiFi.  For a $75 charge.  Uh, no, we already know it’s burned out. We just want to buy a new unit.

We decided to buy out the contract, which now is down to $40.  And find a new carrier.

After doing a lot of research, we’ve signed up with Millenicom.  It has a good reputation and uses the Verizon network, which provides the best coverage around the U.S.  20GB/$69/month.  Plus, get this, No Contract!  Cancel anytime if we wish or are not satisfied with the service.

If for some reason we use more that 20GB in a month (don’t expect that to happen, we’ve never used more than 6-7GB with the Sprint account) they won’t charge extra for occasional overages.  Nice.

So hello to our new Millenicom MiFi!  We signed up over the phone and had the new unit in three days.  So far, it works very well and with its good reputation with other RVers, we look forward to a happy relationship. 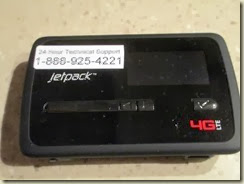 Posted by Paul and Marti Dahl at 9:14 PM