It was supposed to be an easy job.  Marti and I were to take a COE pickup truck to the Fort Gordon Army base and pick up a printer.  Sounded like a piece of cake.

We were glad to take this assignment because it was a pretty cold and windy day, not a good day to wash signs.

We should have known better that nothing goes easy.  The first clue was the directions to the building on the Army base were wrong and we wandered around for quite a while until we found the building.

That’s when we were in for the surprise, the printer was huge!

Thankfully, there was a loading dock that I could back the pickup truck to and after some difficulty getting the printer rolled out of the office, it was rolled on the truck by a couple of the guys who worked in there.  The wheels under it were very appreciated.

Now the fun.  We had no way to secure the monster in the truck to keep it from rolling around as we drove.  The wheels turned out to be a mixed blessing.  We carefully, very, very slowly drove over to the base exchange where we bought rope and bungee cords (you can never have enough bungee cords) and tied that sucker tightly in the truck.

The drive back was uneventful, the rope and the bungee cords worked just fine.  Now the fun was to get the printer off the truck and into the COE office with no loading dock.  The rangers looked it over and scratched their heads as Marti and I untied it. It was going to take a few strong guys to get the job done.  Fortunately there were four maintenance guys nearby who jumped right in.  After looking the printer over, the guys discovered a way to split the machine in two.  Of course that halved the problem, but even in two sections, they were both heavy and required two men each to carry them.  (I was a good boy and didn’t do any lifting…doctor’s orders.  I just held the doors open and took pictures). 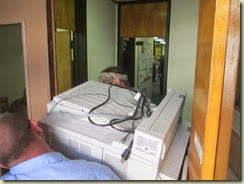 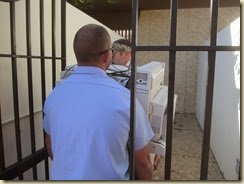 After winding through the maze of office cubicles, the printer was finally inside.  Now it’s left to the office IT person to figure out how to put it back together and set it up.  Glad that it’s not me!  ;c) 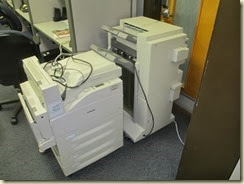 That task being accomplished finished our required work hours for the week (we’re actually over by a couple of hours).  That means the rest of the week and weekend are ours.  Another reason why we’re loving this workamping job!  :c)