Being in no rush this morning to pull out, we had a leisurely breakfast and then set out to make the Journey road ready.  By 10:30 we rolled out of the Wood Smoke Campground and headed down the road to the nearby Walmart.

One thing we like about South Carolina is the reasonably cheap fuel prices.  This Walmart carries diesel and I filled up, wishing my tank was at least twice as big as it is.  I won’t see prices like this anytime soon. Of course, there is also this sticker on the pump: 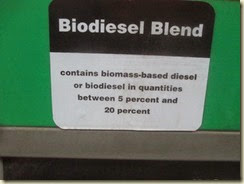 After my initial trouble with Biodiesel and going through a couple of fuel filter changes, the Journey runs well on it, even though I can tell I’m losing a few tenths of a mpg using it.  An occasional bottle of diesel fuel additive seems to help, or maybe it’s just my imagination.  At least I feel better doing it.

We took it easy and had a nice drive up from SC, through the mountains of North Carolina and into Virginia.  We planned to stop overnight at a Flying J, but that’s where the plan went awry.  That FJ is on I-77 and not on I-81, which we were on.  Oops!

Plan B time.  Not being sure of nearby Walmarts or other truck stops, we decided to take another stab at a Passport America campground and found one right off the highway in Radford, VA.  No wandering around back roads for miles this time!

Not much of a campground, but at $18.75 for the night, we paid to stay.  The first site we backed into had a problem with the electricity, the breaker kept kicking off.  We moved down a couple of sites, trying the electric box first with my Surge Guard to make sure it was good, before moving the Journey into it and setting up.

This campground is right on a little river, seems like there are a few fishermen using it. 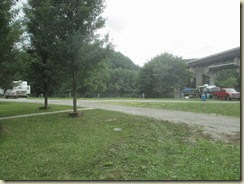 It also comes with an added bonus, 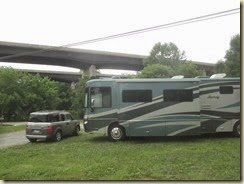 It is right under a highway bridge for I-81.  So now instead of hearing truck engines idling at a Flying J, we get to hear them flying by.  Not a big deal, we have the a/c on and the fan pretty much drowns out that noise.

Posted by Paul and Marti Dahl at 7:14 PM