I should be thankful, I guess.  At least this time my shoes didn’t squish when I walked.  Nor were there “things” to pick up off the ground like the time my sewer hose came apart.

Nope, but I did everything right, and it still went wrong.

Prior to leaving the KOA this morning, I needed to dump the Journey's tanks.  Because of the poor layout of the campsite, I had to back up the Journey to the rear of the site to reach the sewer connection.  As it was, I had to use all 15 feet of my sewer hose to reach the hole.

No threads on the pipe to screw the hose into, so I had Marti keep her foot on the hose where it went into the hole.  I opened the black tank valve and you-know-what started to squirt right out around the hole.  Marti jumped back like a scalded cat and got away clean.  I slammed the valve closed and what remained in the hose continued to squirt out until the pressure dropped.

After a few minutes allowing everything to soak into the ground, I was able to disconnect the sewer hose and wash down the (thankfully) small spill.

I looked down the sewer hole and not even a foot down it was plugged by something.  Plugged solid.

I was relieved that it wasn’t my fault at all.  We gave up on dumping the tanks, but notified the KOA office of the problem.

We did just under 150 miles to get to our “home” campground, Wood Smoke Family Campground, near our daughter’s house.  We had a nice visit with grandsons Andrew and Owen and they helped me clean the bugs off the front of the Journey and set it up.  We’ll be here for a week.

I picked up the mail packet I had my mail service send to Heather’s house and when I opened it, much to my surprise was a notice to appear for Jury Duty in Sioux Falls, SD for the entire month of July.

Hmm, we have plans to be in NJ for another incoming granddaughter.  I am not sure how to work this out, so I’ll call in the morning to see what can be done.

All during my law enforcement career, testifying in many trials. I wondered what it would be like to sit on a jury.  Now that I’m retired the chance has arisen and it’s not a good time.  Plus, even if I was called, I know I’d be dismissed because defense attorneys aren’t keen on law enforcement officers, active or retired, sitting on a jury.

Always something interesting.  Has anyone run into this situation before?  Any advice is appreciated.

In the mean time, I won’t be posting for the next few days, the laptop is going in the shop for a new screen.  I accidently  stepped on my laptop and cracked the screen when I was taking down that busted shade. 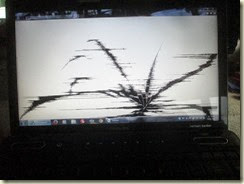 I’ll still be reading and commenting on other’s blogs using my back up netbook, but I won’t be able to post.

Posted by Paul and Marti Dahl at 9:24 PM