First of all, let me say thanks to all my Blog and RV friends for your prayers and support you gave us after my mother's passing.  We certainly found strength in it all.

Marti and I pulled out of the RV-Dreams Rally on Thursday in Sevierville, TN and booked home 500 miles.  We pulled up in front of the house, grabbed some clothes and hit the road again to get to New Jersey.  I was pretty tired and after an hour, we pulled into a Walmart and overnighted.

It was a good stop for us for several reasons, one to rest and one to resupply the food in the Journey.  We had originally bought enough for the two of us to carry us through the Rally, but while we were traveling, we got some great news.

Our son, Ryan is stationed out in Oregon in the Coast Guard.  He wanted to attend my mother's services, but the air fare costs were too prohibitive.  His wife, Amber, did some looking on line and found a special package deal where if they rented a car, the whole family, Ryan, Amber and our two granddaughters, Taylor and Kierra, could fly in for less than the cost of a single ticket for just Ryan!  Have I mentioned I love Priceline?  We were thrilled, we have not seen them since last August. 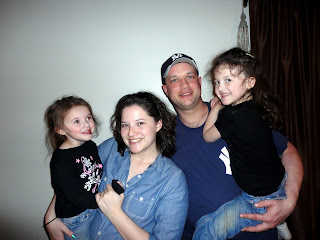 So we re-provisioned with lots of extra food and snacks that the girls would love.

They flew into JFK in NYC and drove out to were we were in Northern New Jersey.  We were able to boondock for two nights in the parking lot of the church my parents attend, and Ryan's family stayed with us in the Journey.

The viewing and the funeral service went well.  It was very hard, especially for me.  My family asked me to do the eulogy.  I was able to do it and got through it without breaking down, again feeling the support of many thoughts and prayers.

It was bitter sweet.  Almost my entire family was there.  And for the first time in several years, my three kids, Corey, Heather and Ryan were together again. 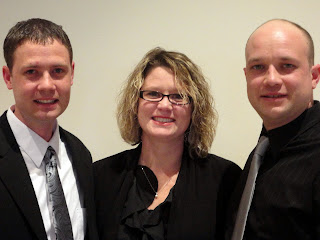 My brothers and sister were all here and we took a family picture with my Dad.  It was also the first time in over ten years we were all together.  My brother Jeff, (on the left) was in the hospital for a leg infection and was able to get out and make it.  Answered prayers. 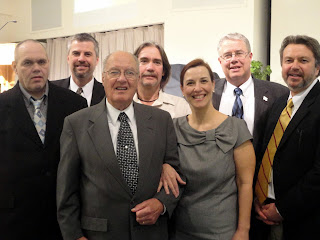 After everything was over, we all kicked back in the Journey and made plans for the next couple of days. 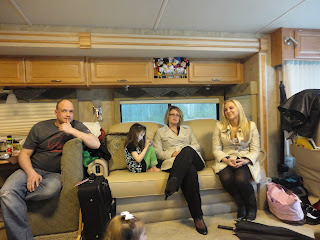 We packed up and headed South about an hour's drive to Corey and Amanda's house, our son and DIL. 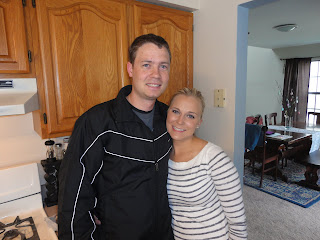 The Journey fit nicely in their driveway and we were able to plug into their electricity. 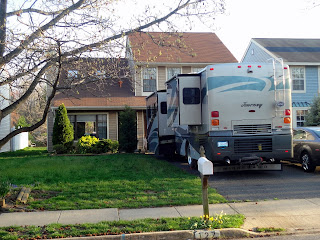 We've stayed close by my father's area to help him with some issues, today Marti and I met with him and took him to lunch to make sure he's okay and will do well.  Sadly, we have to leave tomorrow, (Wednesday) to head back to Virginia and say goodbye to Corey, Amanda and Ryan, Amber and the granddaughters who will fly back to Oregon.
It was a sad occasion, but it was wonderful to see family and our kids.  A Silver Lining.  Another reason we look forward to full time RV travel, we can visit them more often and stay longer.
Thanks for visiting and feel free to leave a comment.

Posted by Paul and Marti Dahl at 9:18 PM