Through The Looking Glass

Every once and a while, I miss my old Coast Guard days.  It was a great career and lots of fun.  Being up in Rhode Island, I decided to make a trip down to New London, CT and visit the U.S. Coast Guard Academy’s newly remodeled Coast Guard Museum.

The museum is not very big, but it has a few neat items on display.

In a previous post a while back I talked about a Life Car, a device used to rescue shipwrecked mariner by shooting a line with a small cannon to the vessel and using the car to carry seven or eight people to shore at a time.  Hopefully no one was claustrophobic. 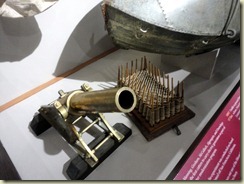 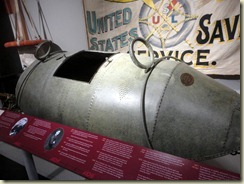 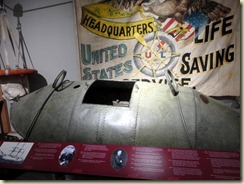 Most rescue stations were not equipped with the Life Car, so they had to use a Britches Buoy. 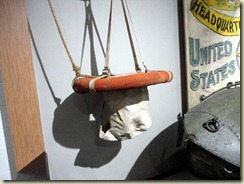 They had a very nice collection of Fresnel lenses that were used in light houses and light ships. 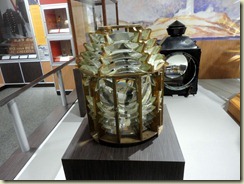 Here is a light from a light ship. 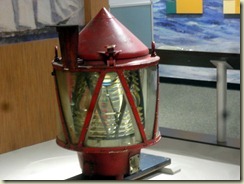 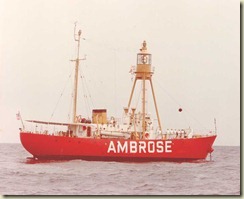 This lens was from a very large light house.  It is taller than I am and I am six foot tall. 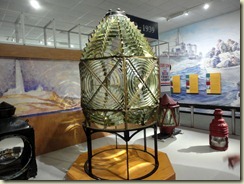 The light house keeper would clean and polish the lense daily.  Not only was that tedious work, but it required several trips up and down the stairs inside the light house.  A job with a built in physical fitness program.

The Eagle is used to train academy cadets in the art of sailing, to understand how forces of currents, wind and sea conditions act on vessels.  This training gives a great background in ship handling to better train cadets for when they join the Coast Guard fleet and operate its cutters.

The Eagle has a figurehead of an eagle on it as seen on this model. 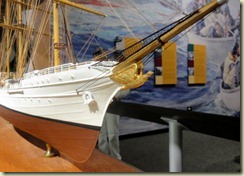 Time and exposure to salt and sun took its toll on the figurehead and it had to be removed and replaced with a new one.  The Class of 1950 alumni got together and donated the money to have the original restored and put on display in the museum.  It is not too small, note the lady in the picture’s background. 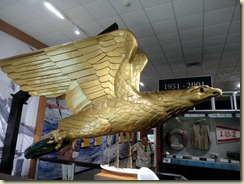 I got a kick out of one cutter model on display, an 82 foot Point Class cutter painted in colors that they had during the Vietnam War.  26 of these cutters were sent to Vietnam to assist the Navy interdicting vessels smuggling arms and supplies to the Viet Cong.  All cutters were given to South Vietnam at the end of America’s involvement. 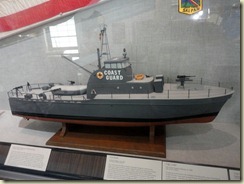 I spent two years on one of these cutters, well after the Vietnam War was over.  These cutters are no longer in service, they’ve all been retired over ten years ago after more than 30 years of service.  Seeing this cutter model on display made me feel old.

The Coast Guard Museum is located on the grounds of the U.S. Coast Guard Academy in New London, CT just off I-95.  It is open to all visitors with a picture ID.  Use your toad or tow vehicle to visit, the academy roads are narrow and parking it a little tight. You can tour the academy grounds and the Eagle on certain days when she is in port.

Posted by Paul and Marti Dahl at 5:06 PM