Caught In A Wedding Party

New Orleans is an amazing place, you never know what might be around the next corner.  We’ve been surprised with everything we’ve found so far.  I got lots of brownie points with Marti for taking her to some of the shops just off Jackson Square. 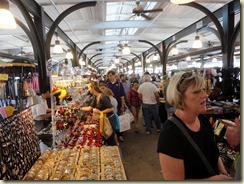 They have all kinds of funny and eclectic items on display for sale, everything from gator heads in all sizes, multi colored bead necklaces,  to brightly dressed Voodoo dolls. 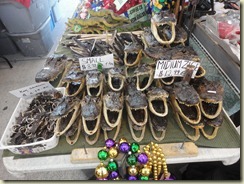 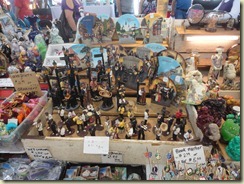 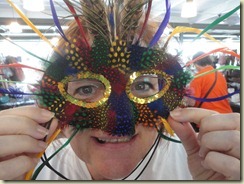 made in China, of course! 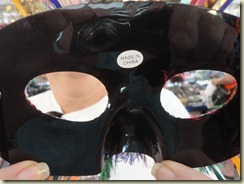 I got the “Two Thumbs Up” approval from Marti for bringing her here for some “Retail Therapy”. 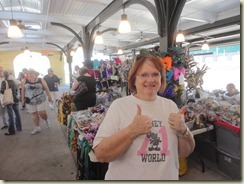 We decided to splurge a little and took a carriage ride tour, it was interesting, among the many historic sites, we saw the house owned by Brad Pitt and Angelina Jolie, as well as the house that Nicholas Cage owned before it was repossessed.  I guess even big Hollywood stars are feeling the recession. 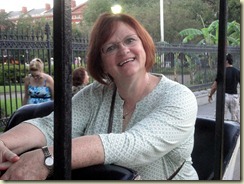 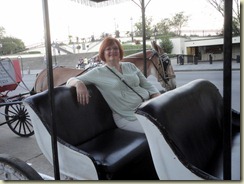 There are all kinds of culinary delights to be tasted.  Some looked interesting, but we passed on them. 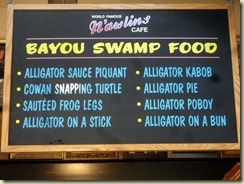 We did not pass up on this famous New Orleans delight: Beignets at Café Du Monde! 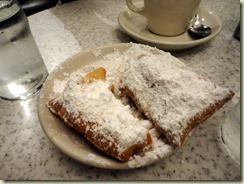 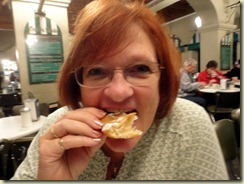 At Jackson Square, we heard what we thought was some kind of musical parade coming down the street, so we walked over to take a closer look.  It was a parade, but not just any parade.  It was a wedding party, complete not only with the bride and groom, but musicians, dancers and the whole wedding attendees.  In no time, we were surrounded by all the revelry. 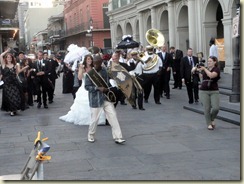 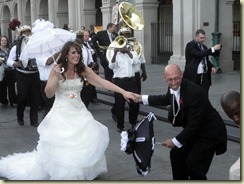 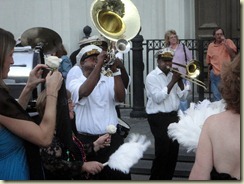 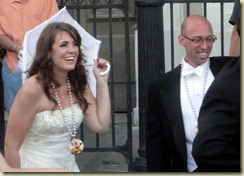 From the way the groom was dancing, I’d guess he would be so tired after the parade that the bride would be carrying him over the threshold!

After dancing in front of the square for about 15 minutes, the whole wedding parade moved on down the street, dancing along to the music of When the Saints Go Marching In.

We’ve had a ball, and that was only our first day!   No telling what we’ll find on Day Two.  We thinking we made the right choice to head to New Orleans instead of the Unclaimed Baggage Center.  What fun would it be to look at racks of old blue jeans when you can come to where there are real Blues?

Posted by Paul and Marti Dahl at 1:14 PM