There we were, booking down the highway at a breakneck 60 mph, heading to Scottsboro, Alabama.  Dreams of interesting, great buys were awaiting us at the Unclaimed Baggage Center.  Airline traveler’s lost luggage would be our goal, it would be fun to paw through all kinds of things and purchase the items that caught our eye.

Then we had an epiphany.  Where would we find room for another this or that, and what did we need it for anyway?  Of course, Marti opined that jewelry doesn’t take up much space, but I thought that any good stuff would have already been sold.  So why did I want to look through some other person’s lost clothes when  I have plenty of mine own to wear?

A Semper Gumby (Always Flexible) moment appeared and we changed plans.  Last February when we were coming back from Quartzsite, Arizona, we intended to go to New Orleans.  Bad timing on our part, it was Mardi Gras.  Not our cup of tea (or booze) so we passed, intending to go some other time.

We decided to make the some other time now because we were only about 375 miles away.  We buckled down, kicked PDD into overdrive and put 300 miles under our belt, stopping for the night at a campground just off I-10 in Alabama.

Originally we looked for a Passport America campground and found one.  We called and asked to make a reservation and they declined, saying it wasn’t worth it for them to take us, but they then gave us the number for this other campground that was much closer to the highway.

It was a little more expensive than we usually like to pay, but being 1/2 mile off the highway instead of 10 miles to the Passport America campground, the 2 1/2 gallons of diesel fuel (at $4.00/gallon) we didn’t have to use helped to offset the higher campground fee.

We got a beautiful pull through site right on a little pond. 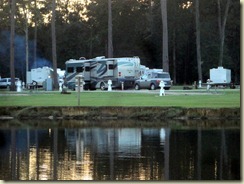 We were surrounded by trailers of welders who are working on a nearby oil field project, all 85 of them.  Seems like every trailer had a pickup or a welding truck parked next to it. 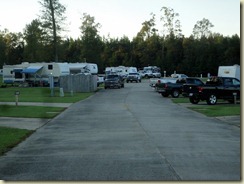 We did our evening walk and met many of them.  Hard working people working to keep oil flowing.  Got to appreciate them.

The campground had something we’ve never seen in a campground before, three of them, to be exact.  60 KW emergency generators.  Kinda’ reminds you you’re in serious hurricane country. 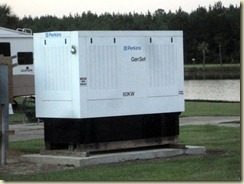 This morning we pulled out and did the last 75 miles into downtown New Orleans.  It was fun driving down I-55 seeing the houses in the bayous.  Not something we’ve seen before. 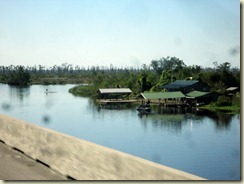 We arrived at the French Quarter RV Resort just around noon, just two blocks North of the French Quarter.  It is one fancy campground, and believe it or not, it is a participating campground in Passport America.  We got the half off rate for one of the three nights we’re going to stay here, and then 10% off the other two nights for being Good Sam members.

It doesn’t have concrete sites, no, they are all paved with beautifully laid out bricks! 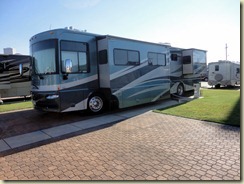 It has lots of amenities, but my favorites are there, a pool and a hot tub!  You don’t have to guess that in no time I pulled the plastic cover off the hot tub and we washed all those miles we traveled out of our weary butts. 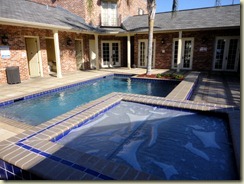 We’ve already wandered around the French Quarter and Bourbon Street but that is for another post.  Yep we’re having fun.  :c) 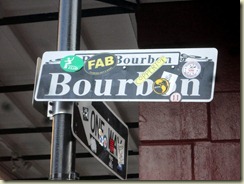 So I close with this picture, especially for my pal, Judy. 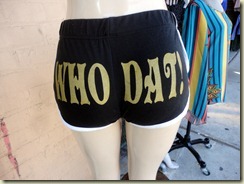