Still Getting The Bugs Out

No, this is not about those rotten stink bugs. 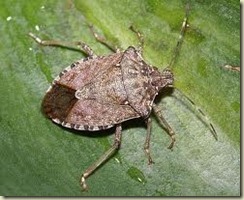 We won the war against them living in the Journey after getting infested with them when we had it stored in a county park in our pre fulltime days.  Thankfully we have not seen any more in the last several months.  Marti sleeps much better at night.

No the “bugs” I talking about are the little problems that all RVs have from being assembled by human hands.

Usually every new RV has some bugs, maybe a drawer that doesn’t close right, or an adjustment needed on a slide, or something like that.  Most bugs are taken care of after the first year or so, the RV becomes very reliable.

After over five years of ownership, I have recently corrected two bugs that cropped up from sloppy assembly at the factory.

The first was a piece of trim in the bathroom.  It came loose and was falling off.  Looking at the trim which ran from the floor to the top of the door, it was attached by one little nail (brad)!

Could the bean counters try to save lots of money by using just one nail instead of several, or was the worker putting on the trim stayed out too late the night before?

No matter, I had to fix it.  A quick touch of my drill and three wood screws later, the trim will never come loose again. :c) 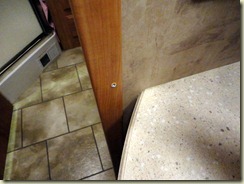 The next bug has been perplexing me for quite a while.  It was concerning one of my basement compartment doors.  Every once and a while this compartment would get wet and I could not find any leaks.  It wasn’t something I noticed before we went full time, but now that we have and have driven in some rain (lots!), moisture showed up too often.

I looked at the door and noticed it did not exactly line up with the body.  It looked like it was slightly ajar when closed tightly. 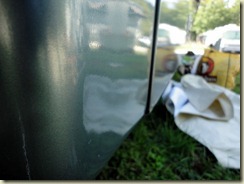 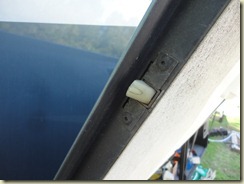 So I looked at the pocket where the latch is supposed to lock in tight to see if it could be adjusted. 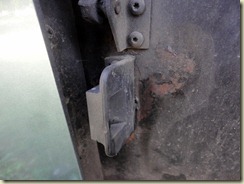 No adjustment is available either.  Looking at it closely, it seemed crooked.  I looked closer. 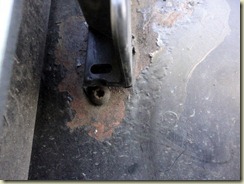 The assembler at the factory missed the screw hole with the screw causing the pocket to not be able to hold the latch and the compartment door in tight like it was designed to. 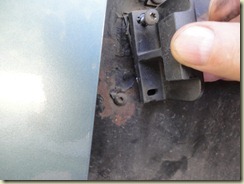 I loosened the top screw and got out my handy drill and drilled a new hole in the correct place for the screw. 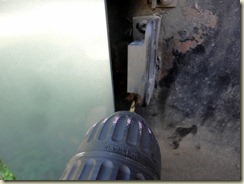 Putting the screw in the new hole, the pocket lined up like it was supposed to.

Now the compartment door is tight and lines up right, just in time for us to drive in some more rain. 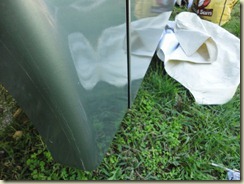 If you noticed the rust on the metal behind the pocket, that’s an ongoing bug that I have been working on.  Winnebago does not do a good job on priming the metal around the compartments, which I have to sand down, prime and repaint.  Good thing I’m retired and have the time to work on that.