Something is wrong when all the RVs you see on the road are headed South when you’re heading North.  But head North we did.  After last night’s stay in a KOA (and two loads of laundry done) we were back on the road.

Not unusual for us was the head wind as we drove up I-77 to I-81.  What was unusual was the high wind warnings that went along with it.  It really did blow, but the Journey handled the winds well, unlike our former motorhome, a Winnebago Adventurer, which would have been all over all over the road with me wrestling the wheel to keep it going straight.  So glad we made the jump into the Journey.

As we rolled, we crossed another milestone, 57,000 miles.  Sorry the picture is a little blurry, I didn’t have time to focus. 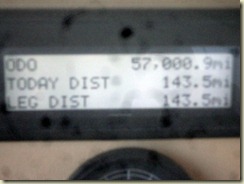 The engine is running well, I think the biodiesel has been pretty much run through or has been diluted enough that it is no longer an issue.  Plus the fuel additive I use (topic for an upcoming post) must have worked its magic.

It seems so strange, after leaving South Carolina, with leaves still on the trees, to seeing colors as we drove North to trees like this at the campground we’re in tonight, Dixie Caverns CG, Salem, VA.  Yep, time for more laundry. :c) 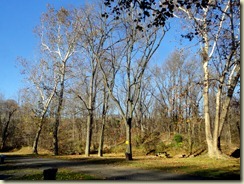 A good overnight stop, nothing fancy, but blazing fast free Wi-Fi for $33.00 a night.  There are caverns here to tour, but we’ll have to pass, no time for that.

I was tickled that we were able to get our satellite TV to lock on, I wondered if it would because we’re right next to a mountain. 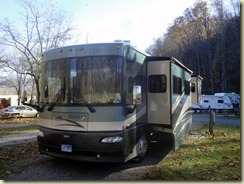 After meeting with our financial advisor tomorrow we’ll be continuing up to Pennsylvania and the granddaughters, Taylor, Kierra and Rebekah for a week, then over to New Jersey to see little Anabelle.  It should be a great time.

Right after the Thanksgiving weekend, we’ll be heading South and I’ll be kicking the PDD into high gear.  They already have snow where we’re heading, four to eight inches.  I don’t want to spend any more time in that stuff than we have to!  :cO

Posted by Paul and Marti Dahl at 7:10 PM