It broke our hearts, but we had to say goodbye to all the Northern granddaughters and head South to our South Carolina “home”.  A short jaunt, only 750 miles. 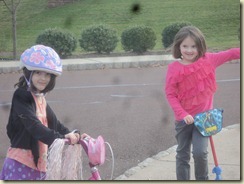 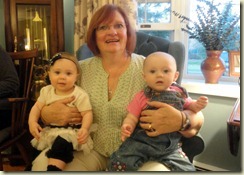 No, we didn’t do it all in one day (Phew!), we actually broke it up into three whole days.  Yes, we are learning to slow down, although two of three days we covered 300 miles each.

A typical drive, we left New Jersey and timed it perfectly to get caught in the Washington, DC area commuter traffic.  You’d think I’d have learned after living in the area almost 14 years.

The only interesting thing we saw on our first day was this car carrier that passed us carrying unusual cars. 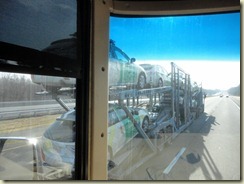 Can you guess what kind of cars these were? 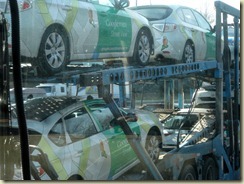 It was a trailer load of Google Earth street cars.  I took their picture before they took mine.  ;c)  (PS:  They’re Subarus)

We spent a couple of hours at a walking pace getting around the Capitol Beltway (I-495) and I-95 South.  We did a blacktop boondocking night at a Flying J in Virginia and woke to frost covered windshields.  We got going pretty quickly heading South.  Enough of that!

We pulled into the Bass Lake Campground in Dillon, SC for an overnight.  Along with it being a Passport America CG, there was an added bonus. 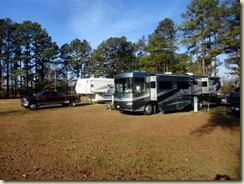 We parked next to our good friends Mike and Terry! 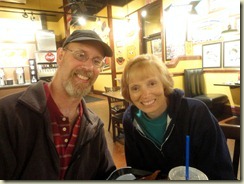 They have become special friends of ours, we first met them at the 2010 RV Dreams Rally when we both were going down the same path to full timing.  They hit the road almost a year before we did and were such an encouragement to us as we had a few frustrating months trying to sell our house.

We had a great visit and look forward to seeing them again soon.  It’s amazing how when we lived in a stix-n-brix, we hardly knew many of the neighbors, now that we are full timers, we have such great friends from all over North America.  :c)

One special birthday wish goes out to my Dad, Mel Dahl, who turns 91 tomorrow, December 2nd.  Someday he’ll actually retire and maybe then I can keep up with him.  ;c) 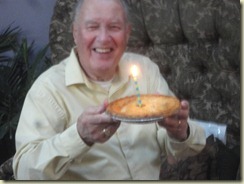 We’re here in Irmo, South Carolina (NW of Columbia) at the Woodsmoke Family Campground the whole month of December and probably a couple weeks into January, visiting the grandsons, Andrew and Owie.  If you’re in the neighborhood, drop by!

Posted by Paul and Marti Dahl at 3:03 PM